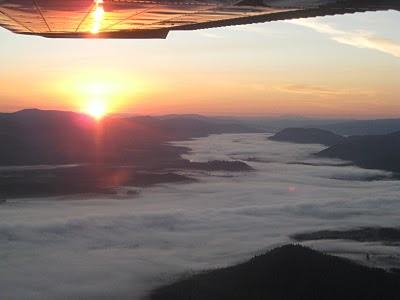 A couple of weeks back I wrote a blog about Charles Pelkey, a former VeloNews staff member who was fired from his job the same day he got a cancer diagnosis (http://twowheeltransit.blogspot.com/2011/08/i-was-just-riding-along-and.html). Charles, as you may recall, is a multi-talented guy, who has a new website with live, minute-by-minute coverage of cycling events (liveupdateguy.com), but he is dearer in my heart for being a lawyer who rides a column called "The Explainer."

For those of you who noticed, the Explainer space on the VeloNews website had remained well after Charles' dismissal and I was beginning to think it extremely cheeky that VN had continued to trade on his good name and erudite explanations. Well, it turns out that the space was being reserved as negotiations were apparently going on behind the scenes to get Mr. Pelkey back penning this column as a freelancer. Not the same as employment, which tends to come with insurance, which one finds handy when one is battling cancer, but nonetheless.

But without further ado, here is a link to the latest Explainer entry about clenbuterol issues - http://velonews.competitor.com/2011/09/news/the-explainer-reaching-the-threshold-and-a-doping-explainer_193156. Charles does an excellent job of answering difficult legal and technical questions in the cycling world with accuracy, insight and in a very reader-friendly fashion. Please take a second to click on the link so that Charles and VeloNews notices that it is a needed and appreciated service.

If you want to catch up on prior Explainer columns, here is the link for that - http://velonews.competitor.com/category/explainer.

Charles touches on his cancer fight in his latest Explainer column and I heard from him recently that chemo is tough but he is doing okay. Please take a second to check out his column.

Thursday night was the final Two Wheel Transit sponsored Shop Ride.  We closed the shop early that night so all shop employees would be able to join the 20 or so folks who came out.   Team Two Wheel was out in force with Gage, Paul, Andrei, Scott, and Tom all in the mix.

The weather was a perfect temperature in the high 70's which means a few of the riders heated things up with a blistering pace.  It was all in good fun and the ride regrouped several times to ensure no one was dropped.

Fortunately, Tom brought about 1/2 of the shop in his panniers because there were numerous flats and fixes that needed attention on this particular ride.  We had a couple of shop first on this ride - a kid threw something at the group (where were his parents?) as we rolled through the West Central neighborhood, and Patrick from the Scoop was waiting for us at the finish with his Scoopmobile full of great ice cream.  What a treat! 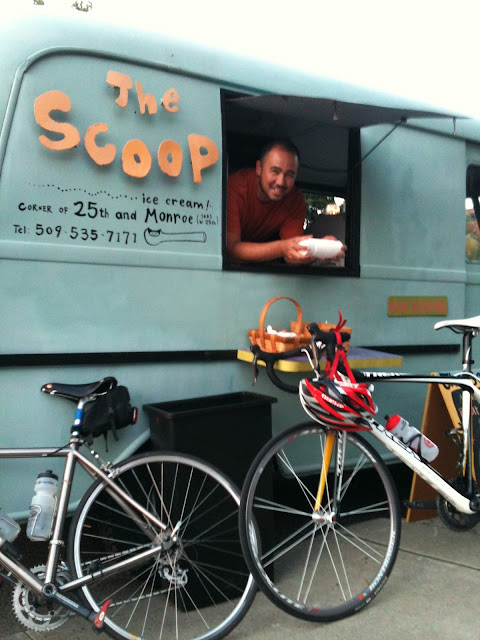 He had great flavors like huckleberry, peanut butter fudge, and strawberry - all of which I needed to "sample" in my post-ride depleted state.

Thanks to all who rode with us this year through rain, lightning, sleet, heat, wind, smoke, and tough kids.  A special thanks to the sponsors of Team Two Wheel: McSpadden General Contracting, Davids Pizza, The Scoop, Desautel-Hege Communications and NAS Pension Consulting for helping the team with jerseys and racing.  Also to team members: Andrei, Gage, Lynn, Paul, Scott, Taylor and Tom for racing their legs off, representing the shop and making the shop rides a success.

Look for the classic white and black shop jerseys at Spokefest next Sunday.

Bruce and Geoff
Posted by Owner 2 at 6:46 AM No comments:

Time to Add Some Fibers to the Diet

Despite my denials to the contrary, cooler weather is here for our morning rides.  Rides with temps in the low 40s makes it tough to ignore the inevitable change in seasons and the need for different clothing options.  The lower temperatures are compounded by our geography where cold, dense air collects in the small valleys at the bottom of our hills.  Sometimes the temperatures are as much as 15 degrees below those on top.

I tend to work-up a sweat on climbs so a 30 mph descent into colder air really gets my attention.  This weekend I had to pull-out my secret weapon to staying comfortable this time of year - Merino Wool head to toe. 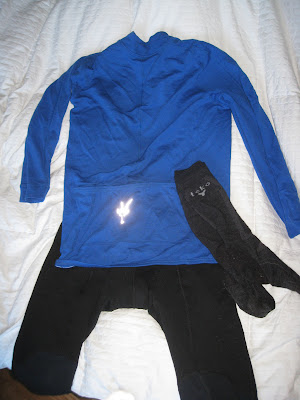 The wool provides a super comfortable loft for warmth and superior wicking for moisture management which gives it the broad temperature range needed for this time of year - all in a single layer.  Ibex Giro Full Zip Long Sleeve Jersey, El Fito 3/4 Bib Knickers and Teko Mid-weight Hiking Socks.  There is nothing else I would rather be wearing - period.  I like the hiking socks since they are longer and thicker than regular cycling socks while still fitting comfortably in my road shoes.

If you are like me and want to comfortably extend your outdoor cycling season as far as possible - consider adding some (wool) fiber to you diet - it might be what the doctor ordered.

The Nicest Thing Said To Me On A Bike

Here is the scene. A group of twenty riders and about 20 miles out of town with a long way to go to get home. Far enough along that we were all warmed up, all breathing hard and hearts pumping. We came to the bottom of a longish and steep climb and the group started to split up. First it was a couple of clumps with little separation, but then the lead group spit out a few and the hind groups splintered into ones and twos as the impetus went from "stay with the group!" to "survive the hill!"

As I came along another rider, he said, "I was looking for you. I know that all I have to do is stay close to you. 'Cause I know one of your teammates will make sure you get back in the group."

It was said in a slightly derisive/slightly amused tone and it wasn't intended as a compliment. In fact, it may have even been a veiled put-down, since the clear statement was that I was the weakest guy on the team; that someone "had" to look out for me. And is absolutely true that I am the weakest link in the chain. I mean "someone" has to be the weakest guy, right? And what's the downside to having stronger teammates, really?

Anyway, it struck me at the moment as funny, as well as true. He was just thinking about self-preservation, but even if it wasn't meant as such, I took it as a compliment.

When you watch pro racing, there are times that domestiques are called by the team director to fall back and protect a leader, or to pull a potential winner back into the group after a tire or bike change. That is a sign of respect for the leader and, frankly, it is just doing the job for the non-leaders. That is definitely not what was happening here. This would be more like a leader/rouleur falling back to help an aging and out-of-shape teammate back into the peloton who shouldn't have been on the road in the first place. In other words, that just doesn't happen in pro racing. And it wouldn't happen in any race I was in either.

But this was a group ride and the astute fellow who spoke to me knew that almost "no matter what," that I had some teammates who were not just teammates, but also friends, who would notice I wasn't there at the top of a climb (not surprising anyone) and they would take some action to make sure I wasn't left behind. It might be as simple as saying, "hey, let's wait up while everyone gets on" or it might be drifting off the back of the group as it rolled along flatter roads to offer me some shelter on their wheel and a pull back to the group. But, no matter how it was done, they would look out for me. And that, my friends, is a nice feeling.

And no matter how it was meant from the rider who was similarly dragged back by gravity that day, I took it as a great compliment.

He may have seen it as weakness in me or in my teammates, but I have to admit it was also observant. I hadn't really thought about the fact that those guys would come back and get me no matter what. I guess I knew that, but I hadn't thought about it in those terms or realized what he had realized as we were huffing and puffing up that hill. But after he said what he did, it made me guess that I had been a good enough friend to my teammates that I was a good enough friend to them that it was worth taking care of me. Even as slow moving as I was that day. And what nicer thing could you say to a guy than that?

So, to Rider One and Two, who were there for me that day and lots of other days, I say, "Thanks!" It is always good to be on a ride with you guys and I look forward to it many more times. Right up until the point you get tired of hauling me back to the group.
Rider Three
Posted by Team Rider 3 at 7:00 AM No comments:

Tonight's shop ride looks to be a great ride with good weather and a good group if the ride inquiries are any indication.  In addition to Team Two Wheel members being in attendance, there will also be a special guest I spoke with yesterday.  It is up to you to decide who it might be.  Thanks for a great summer!  See you there!
Posted by Owner 2 at 6:42 AM 1 comment: