I Dig Riding in the Snow

Let's face it - around here you will be very miserable for a few months if you do not embrace winter.  That means finding ways to get outdoors as much as possible.  More folks are riding fat bikes these days, but they are still best suited for groomed trails or packed snow.  Sheer ice and varied conditions still demand studded snow tires. 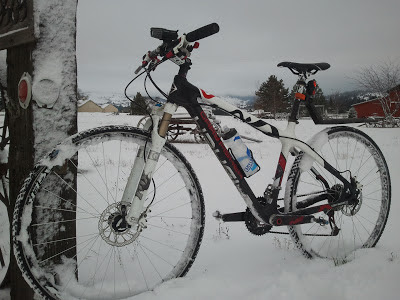 I am running 700x38 Schwalbe Winter Marathon tires with 240 carbide-tipped studs per tire on the Superfly.  These hook-up well in snow up to 3" and on compact snow and ice.  Today the roads became worse the closer I rode to the south hill.  The tires are great until hitting uneven tire ruts or severe side slope where they want to drift a bit as they are pushed laterally.  The other issue is that of hills and curve where cars ooze on the inside shoulder and you have to transition between the soft stuff and the tire ruts and then back.  That is a challenge for any studded bike tire.

57th Avenue was nothing but ice and I had better traction for moving than most of the 4x4 rigs rolling by me.  The best conditions for this setup is frost on pavement, unpacked snow or ice with no more than moderate side slope - everything else requires some finesse.  Good studded tires are not cheap, but they do represent a good value in that they will last 5 or more years with proper care.

Finally, despite how controlled you and the bike are, cars seem to be ill prepared for winter driving and encountering a bike on snow and ice. So if you do ride on winter roads be very aware of your surroundings.

Drivers seem genuinely perplexed on how best to negotiate a bike on the winter roads.  Today, the majority slowed and moved over more than normal - others were unsure whether to pass or stay back and then passing at awkward times.  This was fairly early on a Sunday morning where drivers appeared to be slightly more patient.

It looks like we are going into a pretty snowy weather pattern so I may need to transition inside for a while.  Today was a chance to stave-off the trainer a little longer and hone some skills for when I am sick of the trainer and savor riding outside again.

As we posted in Despicable Thieves Never Take A Holiday, several bikes were stolen from Steve's on Cannon Street on Friday.  Unfortunately the report of 3 bikes stolen was lower than the 5 actually stolen.

Here are the bikes/frames to watch for:

If you suspect you have located any of the above, please call Steve's at 747-5220

We received a disturbing call at the shop yesterday from a concerned apartment manager wanting to do the right thing with a new bicycle she found in a shrub on her property.   I did not recognize the name of the apartment complex so I looked nervously around our showroom for a conspicuously empty spot. I saw none as she spelled the make of the mystery bike to me - "M - A - S - I".

I felt a guilty sense of relief upon hearing it was not a TREK and then worried about from where it may have come.  The complex is located in Browne's Addition so I had a hunch of the potential source but had not heard of any recent thefts. Usually if a bike is stolen the bike shops hear about it from the dealer experiencing the loss, but had not yet received such a call.  We have both made and received that call in the past and the voice on the other end is always sympathetic and disgusted but offering little hope of recovery.

I got the name and number of the good Samaritan and started making calls to some other shops open at the time.  None reported any bikes missing.so I thought I would wait a bit to see if a call came in from another shop.

Unfortunately the call came from Steve's on Cannon Street.  He reported being contacted by SPD at 4:30 am at his residence - which is a particularly inhumane way of starting your day.  They were reporting a break-in through the front window of his shop where 3 bikes were stolen. Been there done that - we know that sick, kicked-in-the-gut feeling when you get that phone call.  You never forget the crunching sound of walking on broken glass while surveying the damage with police radios chirping in the background.

As  a shop owner, you feel sympathy for the other shop because we all have been victimized by property crimes. A natural disaster is more damaging in terms of property but can be reconciled intellectually as an act of living in a natural world.  Theft is a deliberate human act with complete disregard for civility, morality and the families who depend on the business for a living - this is personal and cannot be reconciled intellectually. Anger is the other emotion - for the same reason.  Even with insurance the financial, emotional, energy and business costs are all too real and significant.

It sounds like two of the 3 bikes are still at-large thanks to the good Samaritan. Please be on the lookout as you are out and about for a shiny bike with a not-so-shiny rider or craigslist.  We will provide an update as soon as we have the exact make and model of the other two bikes.  Thanks for your help.