Tekoa? What is that?

For those of you that do not know, Tekoa is a small town on the Palouse, that is just at the end of the John Wayne Pioneer Trail. (This trail is a rail-trail that follows the old Milwaukee Road rail road corridor. It is most well known  for developed the portion west of the Columbia River, but extends all the way from the eastern edge of Seattle to the Idaho border. It continues on into Idaho and eventually meets up with the Hiawatha Trail, but I do not know if you can ride the whole way. 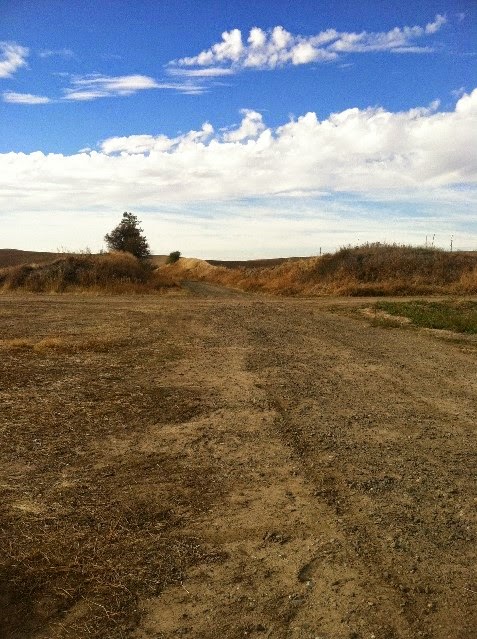 Today being a wonderful fall day and perhaps one of the last, I decided to take the FatBike our for an adventure on this trail. It was a bit of challenge to find a starting point going west from Tekoa, but after getting out the phone and finding the directions on the RailLink app, I found the junction of Lone Pine Rd and Campbell Rd, which really is a junction with a wheat field. I headed west from there and what initially appeared to be a gravel surface for access to the wheat fields quickly turned into an abandoned rail cut with tall grass. 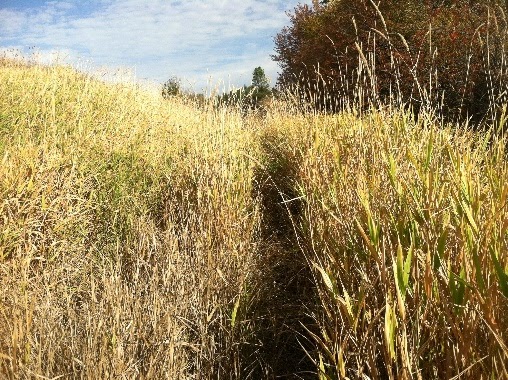 Surprisingly there were apple trees of several different varieties (I tasted as many as I could reach) growing in several spots along the cut. 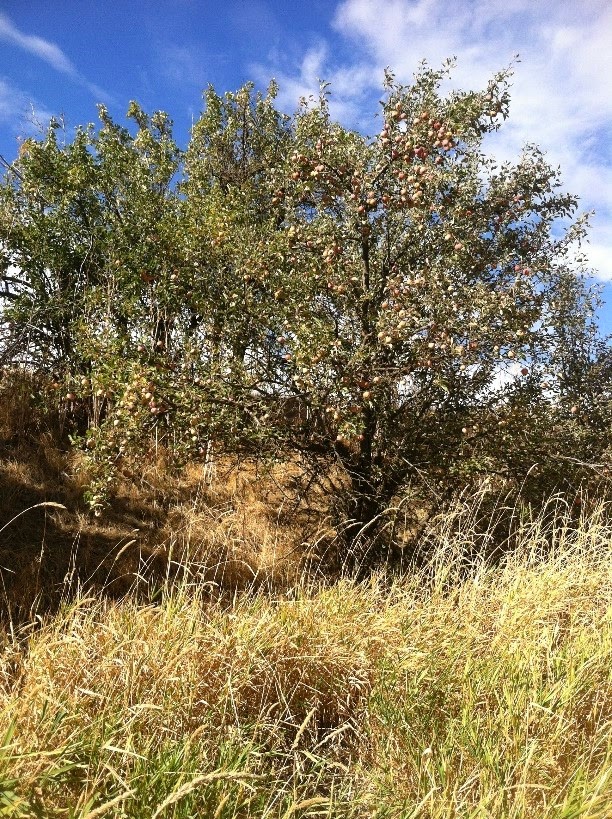 Were these remnants of what once were orchards or wild trees from apple cores thrown from the trains over the years it was an active line? 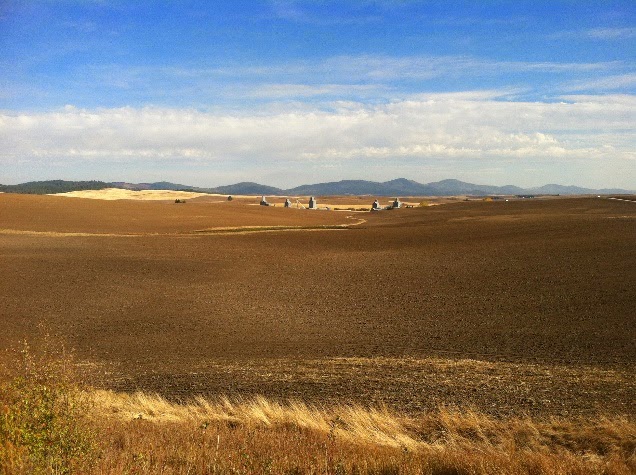 I got bored of this and headed back to the car to check out the route heading east from Tekoa.
This route leaves from the north side of Tekoa on Washington St. It runs straight through prime wheat country. 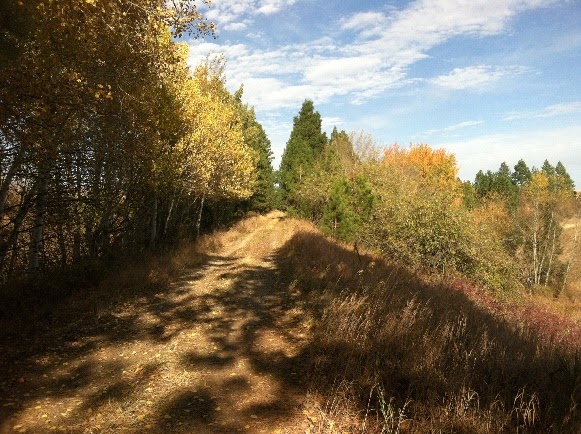 This bit is all dirt/gravel lane as it is access for the farmers to their field.
It was a beautiful fall day. I may have missed the peak of colors, but it was still pretty good.
Officially the route ends at the ID state line, but it appears that the trail continues on. That is left for another day. 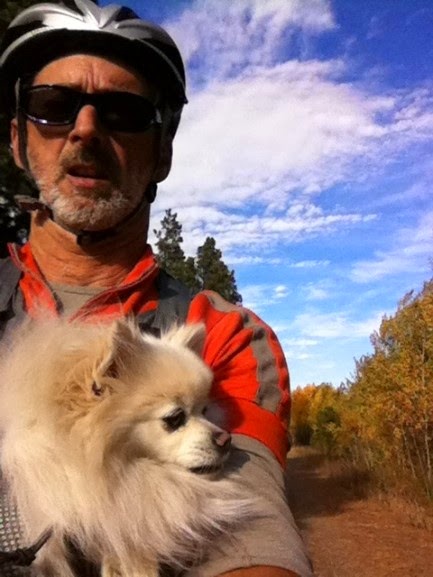 Selfie of my riding companion in her front pack and me.
Posted by Owner 2 at 8:23 PM No comments:

Goodie Bag Pick-up is from 10 - 5 today and 9 - 10 Sunday at our store for those who have preregistered for the Breast Cancer Awareness Ride tomorrow. As of Saturday Morning, over $1,500 has been raised to benefit the Breast Cancer Research Foundation.

Online Registration will be available until midnight tonight. Paper registration in the store is also available today and tomorrow.

Time for a Change - Project Wrap-up 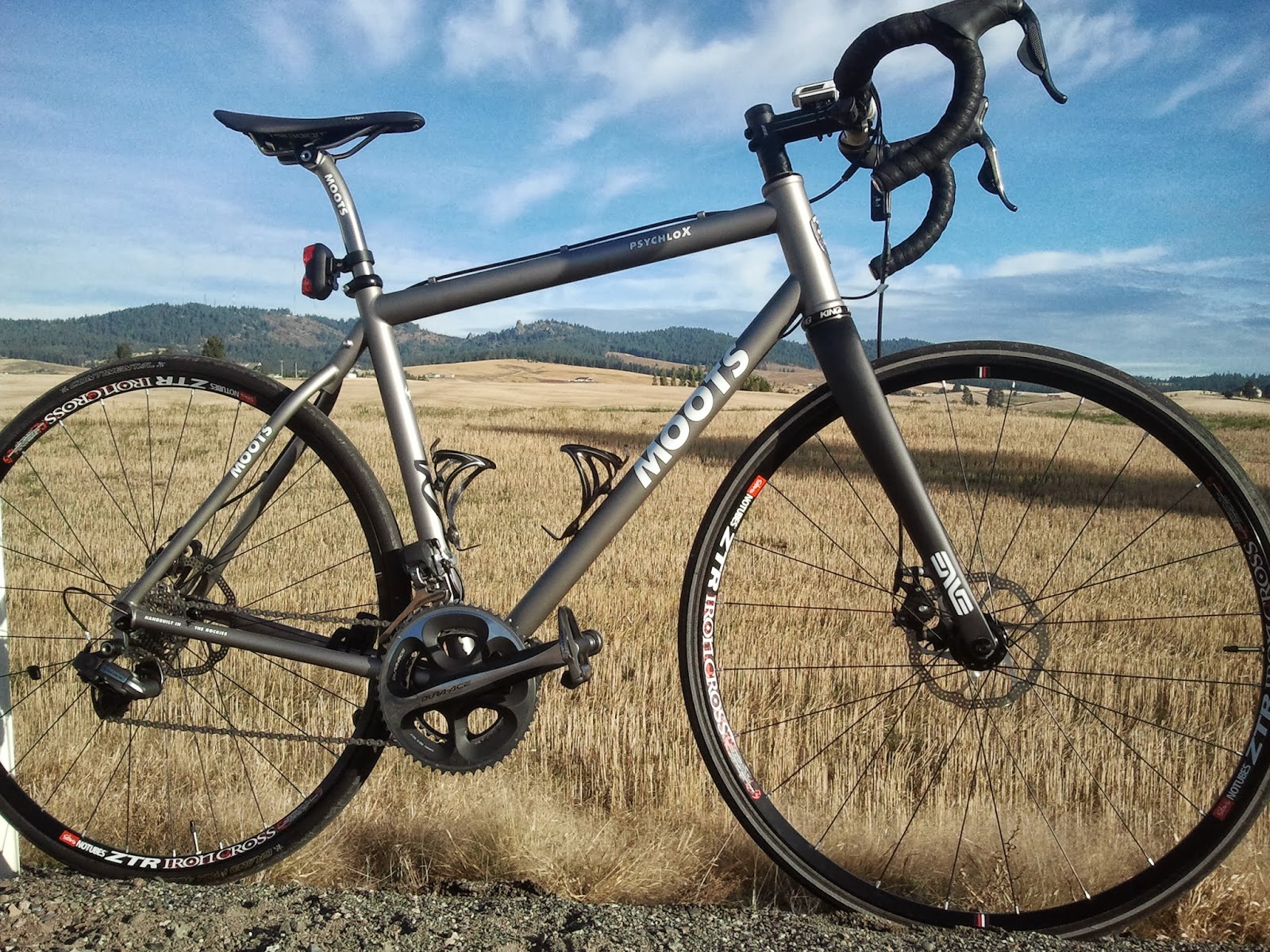 Exactly 1 year ago I started a project to see what configuring and riding one bike for 99.9% of my outdoor riding would produce and whether it was even practical in Time for a Change.  I also did some self-examination with respect to why and how I ride this year.


Some of what I decided was that this year would be about exploring, bringing people together and having fun on a bike rather than a specific mileage goal.  I was undecided about whether this would be be a good thing for me, but was willing to see where it led in order to rekindle the joy of riding.

I did not initially intend to go here when I chose the Moots CX to be THE bike for the year - rather it evolved over the first 1,000 miles of riding as I experienced the versatility and fun factor of a cyclocross bike.  I believed if I set another mileage goal then I would be tempted to go ride a certain number of miles each day rather than explore and seek variety of road, trails and dirt/gravel roads.

Some questions and answers I had for this approach were:
I did realize some of the less tangible aspects of riding this year since I found myself bringing the bike with me more on trips since I was confident that I could find suitable riding surfaces more consistently.  We traveled to Seattle, Phoenix, and the San Juan Islands. I have explored just over 5,000 miles of gravel county roads, single track, abandoned railway, chip seal and asphalt. 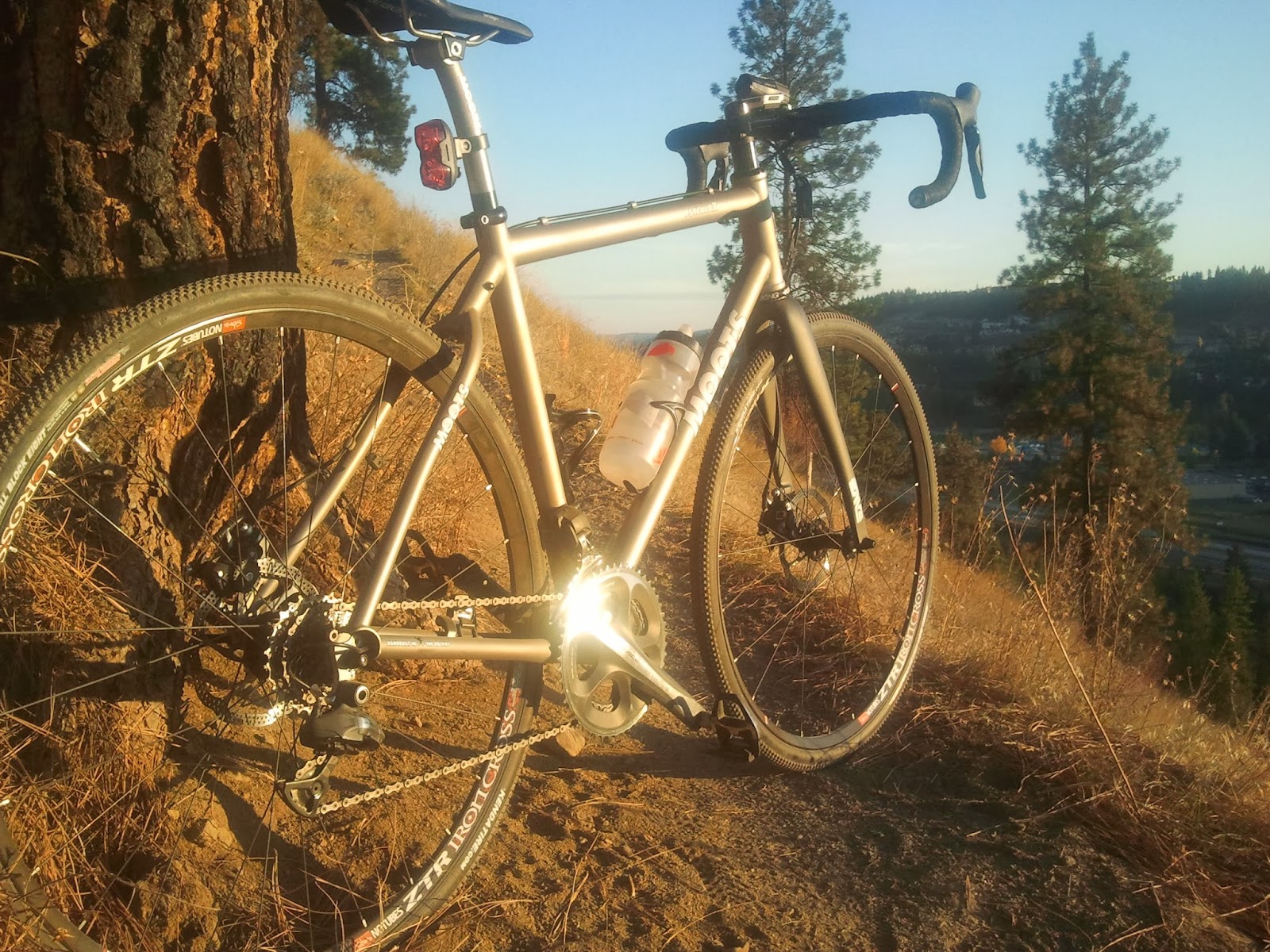 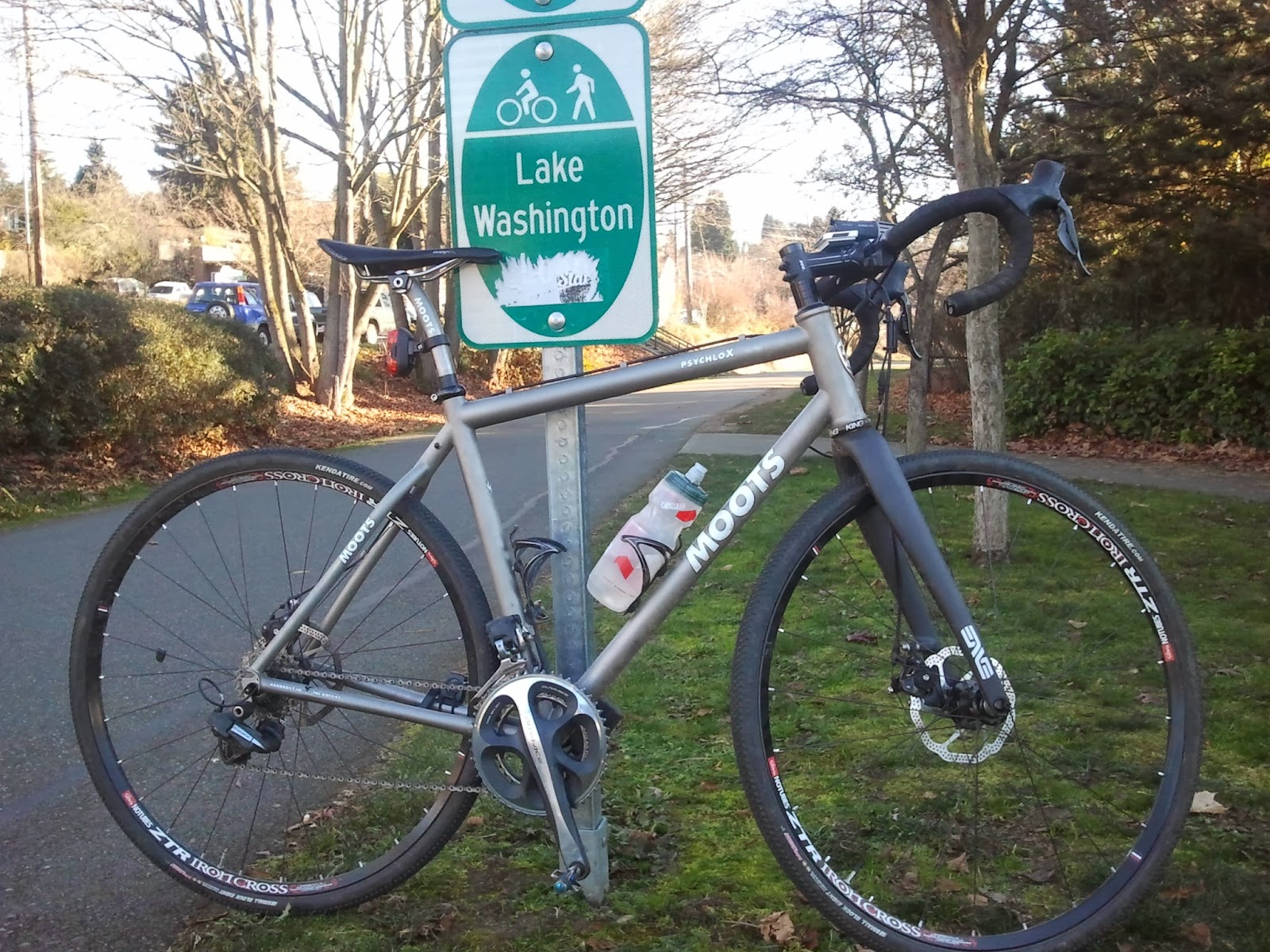 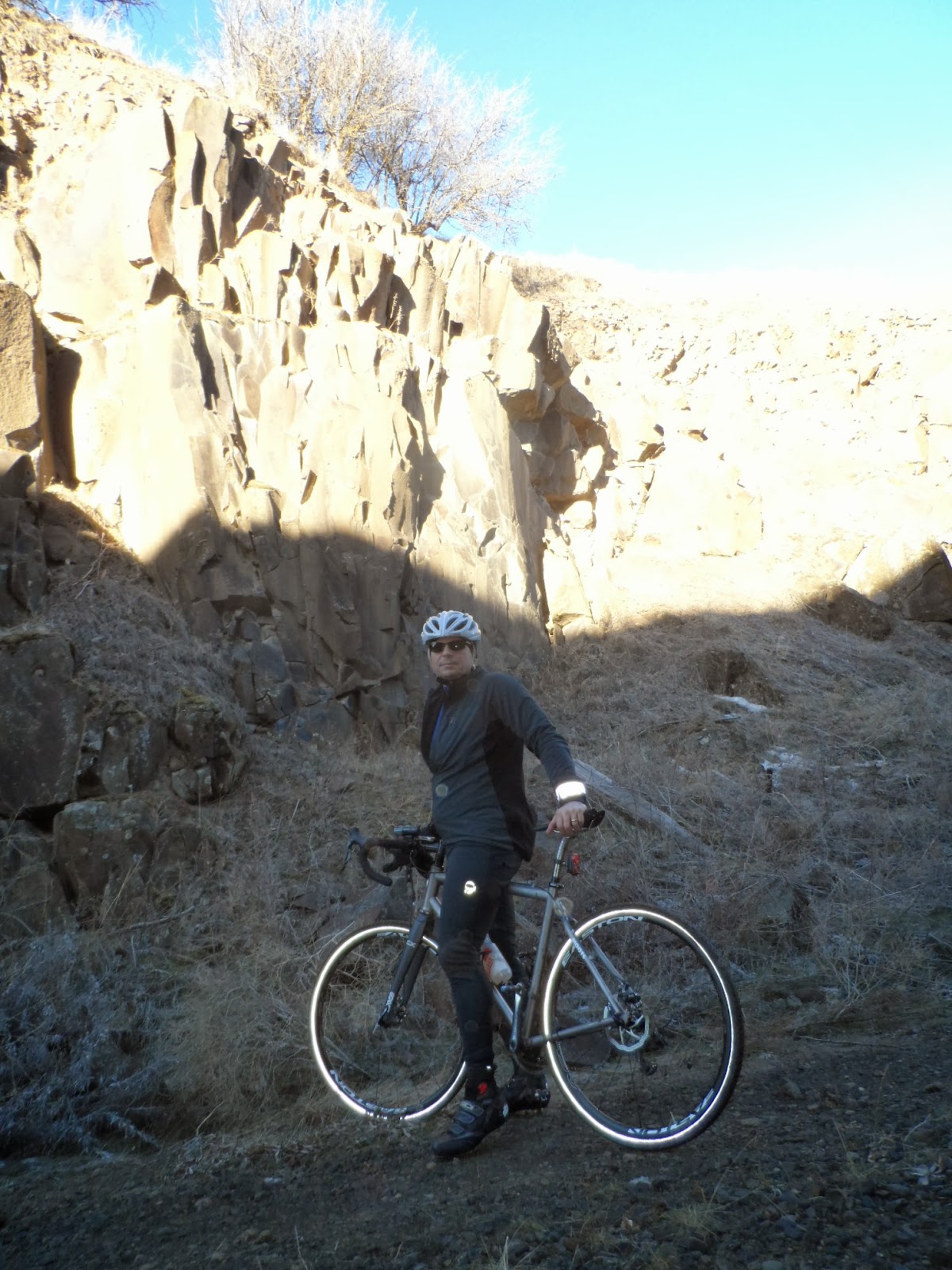 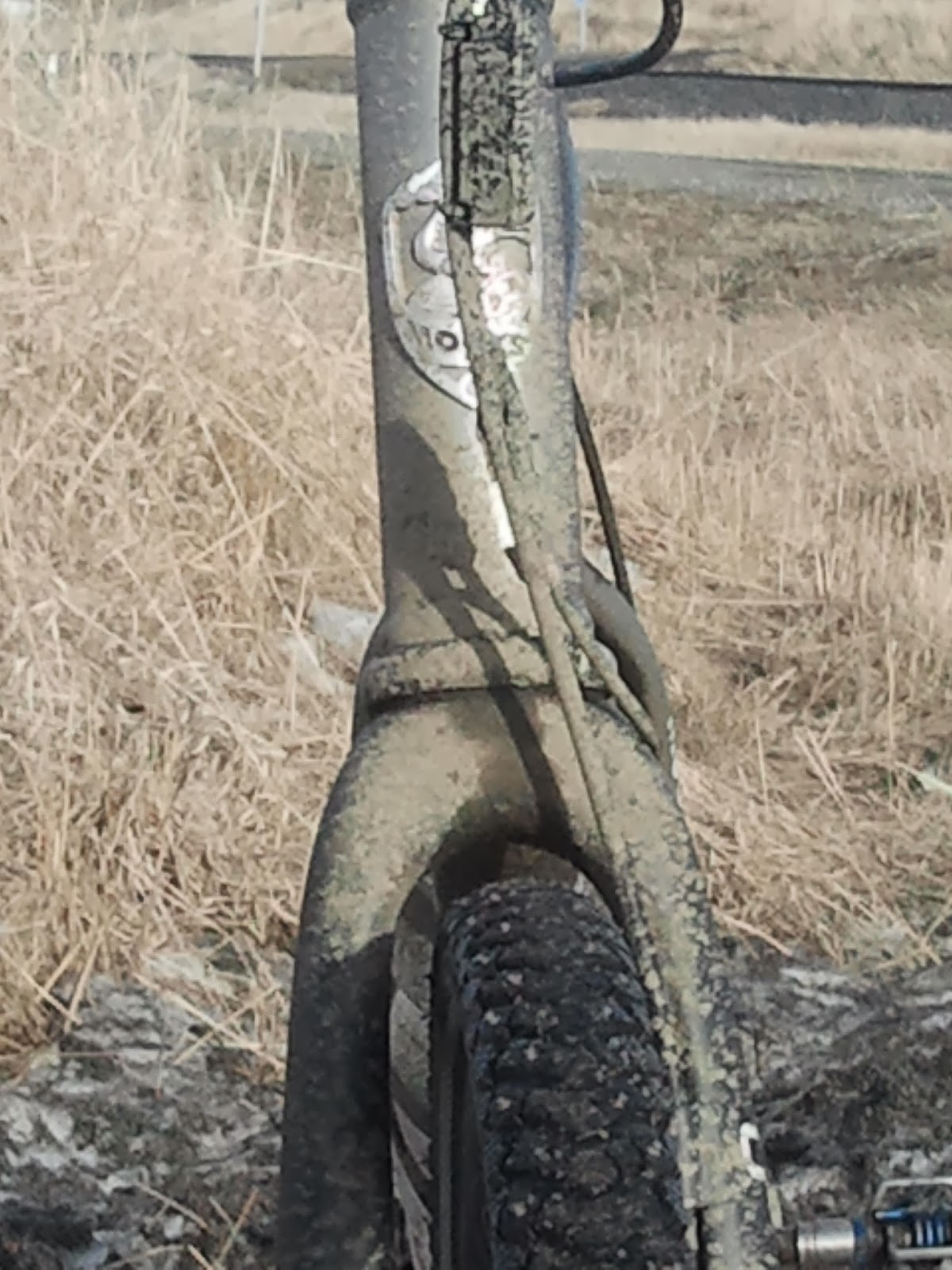 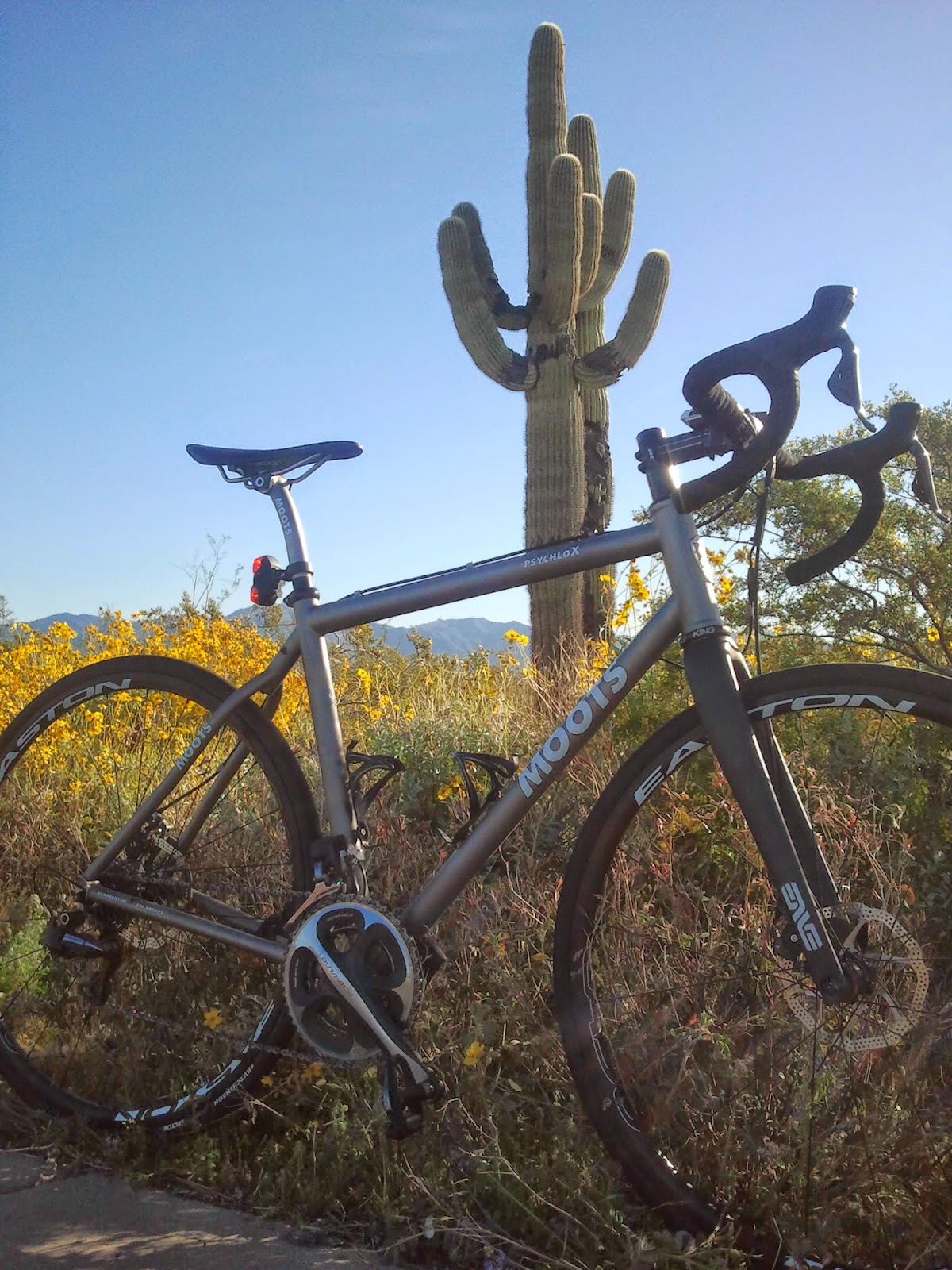 So what have I learned about the bike set-up:

1. Gearing - I have the drive train set-up in slightly modified road configuration with a 50/34 up front and an 11-28 10 speed in the rear.   This set-up is a little wide for my preferences on the road while not quite giving me the low-end I need to spin on really steep unpaved stuff.  I end-up really mashing in these conditions since I cannot stand-up with the Sector 28 tires on slow, steep dirt.

If doing this again, I would have two rear wheels and an XTR rear derailleur so I could run close ratio for the road and wide for the unpaved stuff - I am just not strong enough to spin the steep dirt climbs.

2. Tire clearance - I think to be a true All-Road bike the tire clearance should be available for something up to 38-40c to provide more options for dirt, gravel an snow.  I was able to run 35 studded snow tires this winter but it was a tight fit in the rear.  Also, tires in the upper range give that much more volume and traction making it possible to ride some rougher terrain and single-track if desired.

Speaking of tires I have to rave about the Hutchinson Sector 28 tubeless road tires.  I currently have over 4,000 miles on a front and 3,000 on  rear - these things roll well and I have not had a single flat that was not my fault.


3. Through Axles - I have not had any issues with the standard quick release system front and rear, but it is clear that through axles are here to stay and offer more strength, stiffness and security so why not?  The other feature that a through axle design provides is that the disc rotor is perfectly aligned when the axle lever is tightened rather than moving ever-so-slightly on a regular skewer set up.

In the grand scheme of things I think these are pretty trivial sniveling but considerations if you are going to try and just have one bike for everything beyond technical single-track.

I found the Moots to have a refined feel and playfulness on everything we rode together while being a very fast and comfortable bike for a grand fondo or century.

It is hard to believe that it has been a year since I started this project and it has been incredibly rewarding the throughout.  I am pretty sure that there will always be a CX bike in my stable even if it means not having a dedicated road bike - they are that fun and versatile.