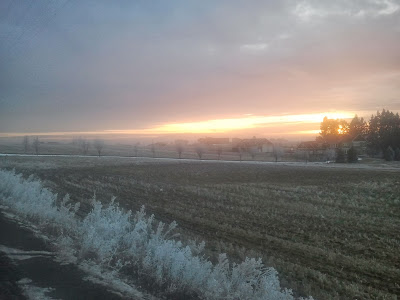 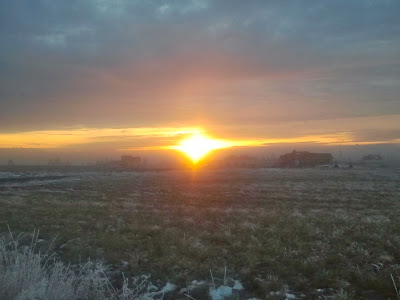 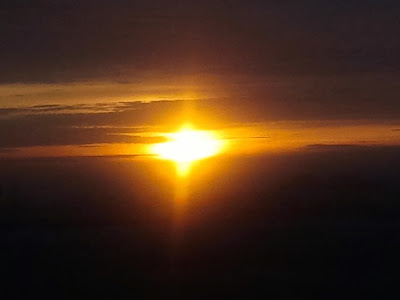 And to all a good-night!

The recent arctic weather served to snap me from my denial that winter may actually be approaching when it comes to the interface between the bike and the road.  The only logical course is to improve the odds of an effective interface by adding some more metal where it counts. 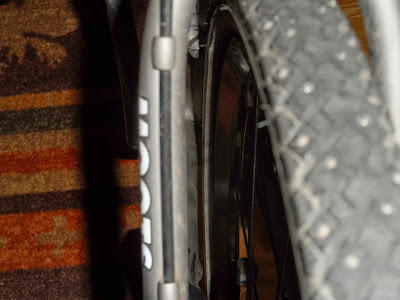 Clearance on the rear is a little tight since these are 35 Schwalbe Winter Marathons. Frame is specified to take a 34 in the rear, but if you are going to this route it is wise to get the longer chain stay option to provide a bit more tire clearance down low.


This setup will be fine unless I break a spoke in the rear - I have seen chain stays where tire rub has started to saw the frame.  If it rubs - time to call the sag wagon.

"On-your-left" -  are the three words a cyclist never wants to hear.  This means another (faster) cyclist is overtaking you and will be dropping you after passing to your left.  My wife even knows these words though she is not a cyclist and apparently should have married a faster one - but I digress.

It has been frigging cold in Spokane this last week as artic air made it down this way from the great white north.  The only folks riding outdoors are fat bikers and other hard core riders.  I made it outside 2 times last week before I cried uncle and headed for the dreaded trainer.  I know some folks who can ride the trainer for 2 and 3 hours at a time, but they also regularly watch soccer so I guess they are used to that level of boredom.  Some, even ride the trainer while watching soccer - which is a cry for help in my opinion.

Mrs. TWT and I had the opportunity to sneak over to Seattle this past Friday to watch our son's HS football team compete in the Tacoma Dome for the 1A State Championship.  This meant rationing  available luggage space so I had room for the Moots in case 24 degrees F felt more ride-able than 6 F.

We arrived about 3:30 pm on Friday and checked-in to the Silver Cloud at University Center on Montlake Ave.  We have stayed here many times and its proximity to dining on the Ave.,  Bellevue, I-5, and the Burke Gilman Trail make it our go-to place when we head that way.  I have not had any miles of consequence since riding the Moots out to 9 mile and back this fall and was hoping it would be warm enough to get some time in the saddle. 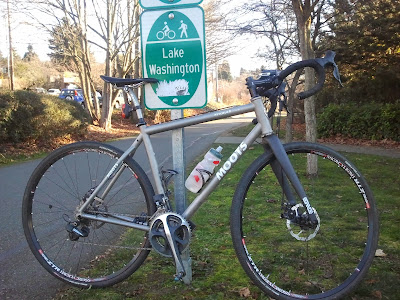 I was on the trail by 4 heading north to Woodinville in about 30 degree weather and a cold headwind.  I took-off at tempo pace with the bike in the XC Configuration and it just felt good to be not cold and out on the bike.  I have quite a few miles on this trail as it became my salvation each evening after sitting lectures all day during banking school at UW a few years ago.  I would take my bike over for each of the 3 sessions and enjoy the trail and warm weather every day could get out.

I knew I would be out after sundown so I had the lights ready to go for as long as I felt like riding. The trail meanders along Lake Washington and provides some great scenery as you approach Kenmore.  The trail was in great shape with the exception of some tree roots bulging in a few spots and appears to have been repaved on some of the sections outside of Kenmore. 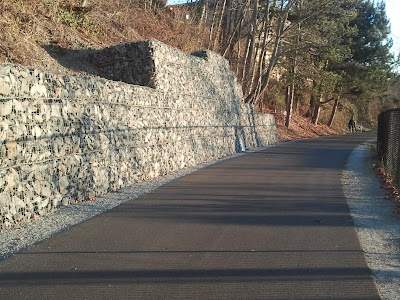 I made it to Woodinville just after dark and was about a 1/3 of the way back when I noticed I was casting a shadow in front of me - crud!  I glanced back and saw a REALLY bright light behind me and closing in fast.  About a minute later I heard the dreaded words over my left shoulder - at least it was a male voice so I wasn't getting "chicked" but it was still bad.  I sprinted to catch-up and it turns out the rider commutes daily on his Cervelo` to his job as a project manager in Everett and is a super nice guy.

I wanted to point out that I was riding an XC bike, with XC knobby tires, but my pride made me suffer in silence.  So yeah, I got passed, but nothing was going to detract from enjoying this weekend and getting to ride something different with some great views.  By the end of the weekend, I had logged a solid 5 hours in the saddle over 3 days and watched my son and his team dismantle the other football team 31-13 for the State Championship. As an added bonus, I reached my annual riding goal of 5,000 miles this year on the last ride of the weekend - Boo Yah!