In today's The Slice Paul Turner proposes selling his services to local realtors hoping to sell a house.  His theory is that a prescheduled ride by on a bicycle will help to sell the house where his "presence was helping to make the neighborhood seem inviting."

We agree in principle and with some slight modification think his idea could catch on.  The modification in this case would be to outfitted in the Two Wheel Transit Shop Jersey while performing this valuable service to area realtors.

The clean lines and classic design of our jersey will make almost any neighborhood more appealing and is certain to accentuate many architectural styles of homes for sale.  On a clear day you can almost hear the real estate values increasing as we ride throughout the city. 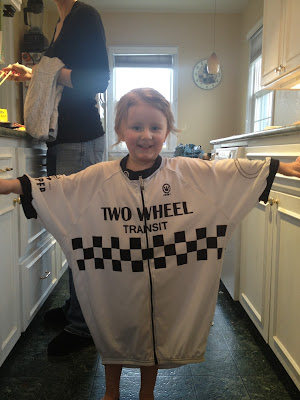 ﻿
Another key feature is that this jersey makes a statement at any speed which depending on the neighborhood is essential.  You need to look good on climbs, descents and on the flats.

In short, we think he is on to something but needs to ensure that the real estate on his body is clad in only the best as he communicates the bikeyness of the area's in which he is called to render his services.  Two Wheel Transit Bicycles stands ready to help!

Look for a long ride report on a Trek Domane 6.9 coming soon.

We never lose the thrill of delivering a new bike that fits the customer perfectly and provides the features and quality that will meet their needs for years to come. 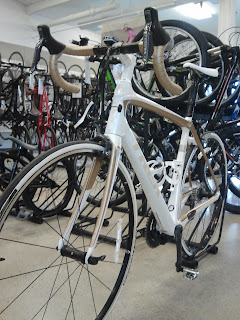 Today we had the joy of delivering a 2013 Trek Domane 5.9 Women's Specific Design.  This bike sports the most comfortable and efficient ride in the industry and Shimano Di2 Electronic shifting - in a word, sublime.﻿ 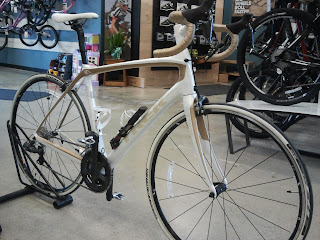 It just never gets old.
Two Wheel Transit - Cycling for Life.﻿
Posted by Owner 2 at 11:26 AM No comments:

When you mention the band Van Halen, you immediately bifurcate any group as they argue the merits of David Lee Roth vs Sammy Hagar as the lead singer.  Most things in cycling are that way too - always two camps.  26 vs 29 inch mountain bike wheels, 700 vs 650 road wheels and fat vs skinny .  And that is just wheels and tires.

We were having one of these either/or discussions in the shop regarding using road tires on dirt for an upcoming Gran Fondo.  I was of the camp that unless the dirt is super loose and rocky that tread or lack thereof really did not make much difference and would roll better on the paved parts of the route.  The other camp was you needed some tread and the more the better to handle the dirt.

We really did not get very far in the discussion before we lost interest and moved on to other topics.  I had forgotten the discussion until riding out on the Palouse this morning and remembered that there was about a 5 mile section of dirt on Jackson Road that runs between Hwy 27 and Valley Chapel Road.

As I approached Freeman I thought it was time to put my money where my mouth is and ride that 5 mile dirt section on my "skinny" tires with no tread   The road is paved in Freeman and for about a mile thereafter.

Since I was road riding I was on 700 x 23 Bontrager Hard-Case tires inflated to about 110 psi to handle the sand and glass still on the shoulders of the road.  These tires are tough and very flat resistant.  I also like that they are only 330 grams so they do not feel overly sluggish.  The bike was an aluminum Klein Reve with carbon forks and seat stays. 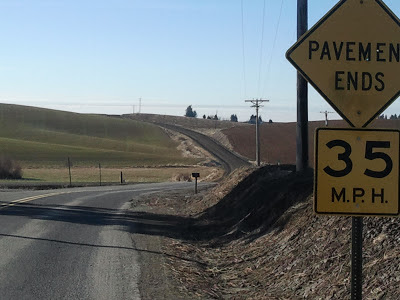 The road appears to have been graded recently, so there was probably more rock on the surface than you might normally encounter, but no washboards whatsoever.  It still had some moisture from the rain and snow this week so dust was not an issue. 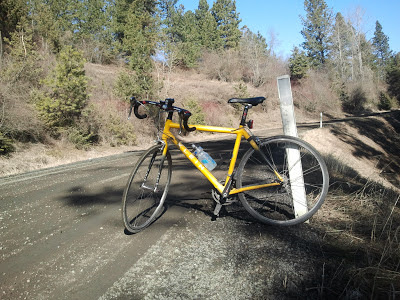 After a couple of miles of rolling along the Palouse you start descending toward Latah Creek and into some trees.  Top speed was around 29 mph and the tires seemed perfectly at home on the dirt at that speed - braking and cornering were not an issue. 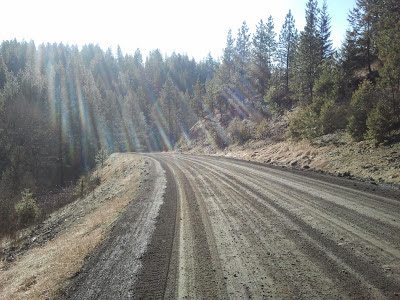 After the descent the road follows Latah Creek for awhile and starts the climb back up to Valley Chapel. 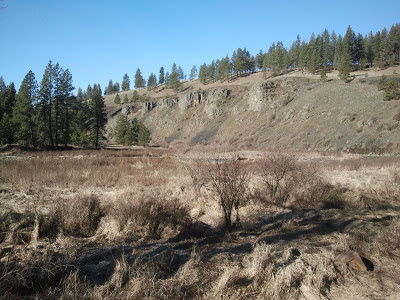 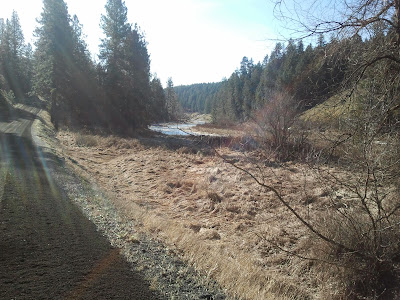 Climb-out was pretty non-eventful and traction good both sitting and standing back up to the paved road.  I was very happy to be running 700 x 23 tires back on the road and found them quite well mannered on the dirt portion of the ride.  I would consider running more volume like a 25 or 28 if riding a route that had a lot of dirt, just to be able to run a little lower tire pressure and get a more compliant and less hoppy ride.

Bottom Line:
Traction on dirt with semi slick or slick road tires will most likely not be an issue unless it is deep, loose or muddy - then, no amount of road-type tread pattern is going to be any help - so I say tire tread is not critical and riding road tires on reasonably compact dirt and rock should be fine otherwise.

Finally, I say Sammy Hagar.  He had a much broader vocal range and was far less obnoxious and had a long and varied career - can anyone say Montrose?
Posted by Owner 2 at 5:38 PM 2 comments: