We are pleased to announce that we are now a stocking dealer for Lynskey Performance Design, a US manufacturer of high quality Titanium road, cyclocross and mountain bikes 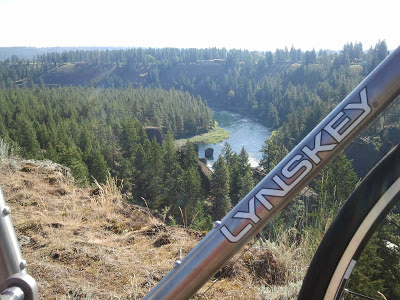 .
This is in addition to TREK and Moots Bicycles.  We feel the addition of Lynskey rounds-out our offering of bicycles at all price points.

Check back here for addition information on this line and for ride reviews of bikes as the become available.

Where Will All the Bikes Go? - Part 2

Some Good News and Some Bad News

In the last installment of Where Will All the Bikes Go? we reviewed the changes that are occurring daily at US 195 and the Cheney Spokane Road.  The State of Washington is constructing an interchange to make crossing and entering the highway safer with a series of on/off ramps and an overpass.  This all looks fine and good for cars but what about the impact on cyclists?

Being the super sleuths that we are, we dug a little deeper to try and answer these questions.  This included pulling up the site plans for the project and a lengthy discussion with the WSDOT engineer assigned to make this thing work.  Chad Simonson, Project Engineer WSDOT Eastern Region was very helpful and went over the below site plans in detail and even pointed-out a recent revision.  He admits the changes for cyclists are not perfect, but every effort was made to balance the needs of all users which includes vehicles and pedestrians as well as cyclists who are commuting or riding for recreation.

Below is the southern portion of the plan which depicts an off-ramp for northbound traffic, an on-ramp for southbound traffic and an overpass for both to cross over the highway.  The most notable change cyclists going north is that they are now required to exit the highway and then proceed either west across the overpass or north in a two-way lane shared with pedestrians.  This lane is physically separated from vehicle traffic and continues on to Inland Empire Way (IEW) rather than back on to the highway.  IEW is now and will remain a dead-end for cars with no access to US 195 which why the separated lane is two-way.  cars and cyclists can use Thorpe Rd as the main access to US 195 from IEW north of the interchange.. 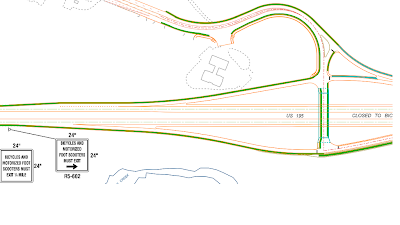 Riders wanting to access the highway from IEW south of Thorpe Rd. will continue from the dead-end and south onto the overpass.  They will then have to merge into the left-hand turn lane and then onto the southbound on-ramp and on to the highway.  The on-ramp will have a 16 foot shoulder shared with a sidewalk which should give cyclists and pedestrians plenty of room. 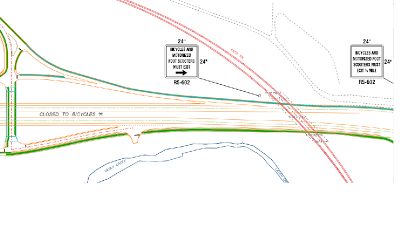 Now the bad news. Southbound cyclists already on the highway have a couple of choices.  According to the engineer, the above diagram is incorrect in that southbound cyclists are not required to exit and can continue on the shoulder under the overpass.  The concern with that is having to cross exiting traffic prior to the off-ramp and then cross traffic again at the southbound on-ramp south of the bridge - neither of which sound  appealing during heavy traffic flow or from the standpoint that cars will be going close to 55 mph at both.

The other alternative is to exit on the off-ramp and cross over the the east side of the island at the top where cars have a lower speed limit and then proceed across the bridge and back on to the highway via the southbound on-ramp.  Neither sound all that appealing, but the choices are there.  The other alternative would be to cross the highway at 16th and then use IEW to get on the two-way path described above and then continue south on US 195..

Bike access to and from Cheney Spokane Road looks fairly straight-forward without too much hassle.  In summary, we are all for the project given the number of accidents and tragic loss of life that have occurred at that intersection.  The changes for cyclists are not perfect, but with some planning and experience seem to be workable.

The project is hopefully going to be complete in late fall and just in time for the heavy winter cycling season.  Until then, the area is a very dangerous place for cyclists with the lack of a shoulder, one lane of traffic each way, cars crossing from the west and heavy equipment moving about so please try to avoid it if possible.  We will check back on progress in a month or two and provide an update.  Until then - safe riding.

It Could Just be Someone You Know

In case you are wondering, June is National Be Kind To Snakes Month. (NBKTSM) where we all should be on the look out for snakes warming themselves on the road.  Those that have followed the blog for awhile may recall my post almost 2 years ago to the day - Ride Creature Feature where I profiled the existence of Rubber Boa species of snake in the western US.

Today I spied this handsome little guy trying to catch a few rays down by Latah Creek on Valley Chapel Rd.  He was on the other side of the creek and about 1/4 mile from my first encounter with one of his relatives 9 years ago.

It was still only 57 degrees so it think he was jumping the gun a bit.  He is very young and almost looked more like an overgrown earthworm. 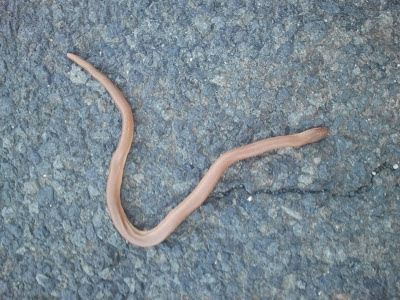 I was concerned with his safety given that he was in the road and all so I dutifully circled back to relocate him to safer terrain.  He was pretty cold, but otherwise unharmed so I carefully picked him up and set him over to the shoulder where he could warm-up without the fear of getting squished.  I swear he gave me a slithery little thumbs-up as I rode off to face the lung-searing climb up the VC grade to Mt. Hope. 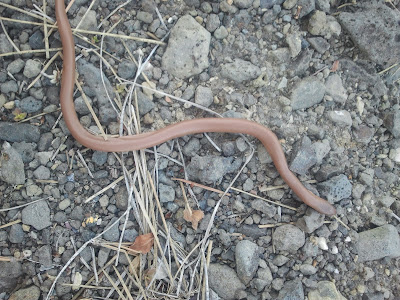 The goal of NBKTSM is to raise the collective awareness of these oft misunderstood creatures to avoid squishing them and help move them to safety.  You never know you could be saving the life of someone you know.

See you on the road.

Where Will All The Bikes Go? 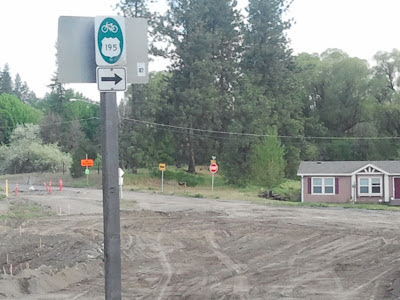 The Saturday before Bike to Work Week I had the misfortune of riding from Hangman Valley Golf Course to Downtown via US-195.  It was misfortune for 2 reasons: First because I was meeting riders at 30th and Grand (two long climbs from my house) and I discovered I had left my Di2 battery on the charger and the bike was now a single-speed stuck in a 50 x 11 gear so no big hills for me.  Second the :"flattest" route between my battery and me was the heavy construction of US-195 for the new interchange at  the Cheney-Spokane Road.

For those who live in Hangman Hills, The Ridge at Hangman, White Road, Eagle Ridge and Qualchan, US-195 is preferred route to Downtown, 9-mile, Sunset Hill and the Fish Lake Trail. The route is popular because of wide shoulders and easy access to arterial roads like Hatch,  Inland Empire Way, Thorpe and 16th Ave. With this in mind, I set-off on the knee-killing single speed in hopes of being soon reunited with my battery and blissfully unaware of the following information from the WSDOT warning cyclist of doom and destruction :

US 195/Cheney-Spokane Road Interchange (MP 94)Traffic Impacts: HIGH IMPACT!! Drivers should be alert for trucks crossing the highway during evening and overnight hours. In general, northbound US 195 is reduced to one through lane in the vicinity of Cheney-Spokane Road. Northbound drivers need to use Qualchan Road to access Cheney-Spokane Road. Northbound drivers should be alert for possible congestion and slowing traffic. The southbound off ramp to Cheney-Spokane Road is now closed so drivers will need to be alert for southbound highway traffic slowing to make right turns into Cheney-Spokane Road. This is a long-term construction configuration. The US 195/Inland Empire Way intersection is now closed. Inland Empire Way traffic is directed to the Thorpe Road intersection. This is a permanent closure to accommodate the new northbound Cheney-Spokane Road northbound on ramp. Special note for bikes: Bicycle riders need to use extreme caution on this section of US 195 as there is limited or no shoulder and be alert for equipment adjacent to the roadway, turning truck traffic, and other construction-related activities and may wish to seek alternate routes to avoid delays. Area residents need to be aware of night work on this project. Residents can call 324-6250 for noise-related information.Project Description: Construct new full interchange.Project Website: www.wsdot.wa.gov/Projects/US195/CheneySpokaneIC/

Yep, the Special note for bikes highlighted in yellow sounds like a real pleasure zone for cyclists during construction.

I arrived at the construction zone to find the shoulder gone and access to Inland Empire Way all but obliterated which gave me the choice of riding on pavement in 55 mph traffic or going CX on the dirt for a 1/4 mile with 700 x 23 road tires.  I chose the latter and soon found myself tooling along on IEW.  The rest of the ride was uneventful, but I have since been wondering how the WSDOT has planned to get cyclists safely through the new freeway-like interchange so I did some research and will report my findings and concerns in the next installment.