It is with a mixture of anger and sadness that I am posting the theft of one of our customer's bikes from Holy Family Hospital while he was at work. 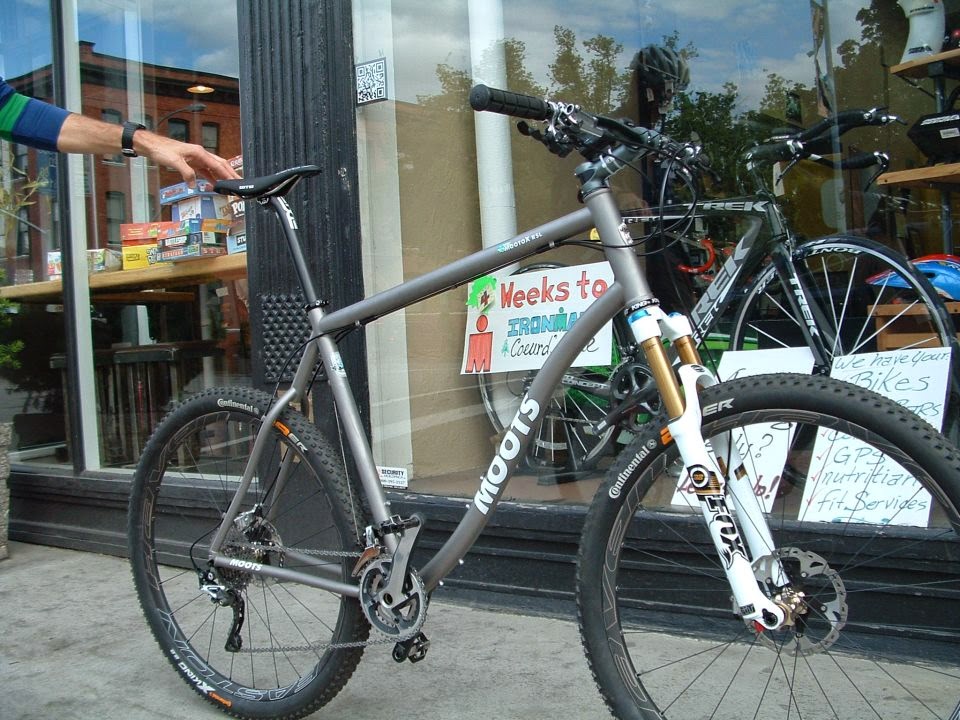 The bike is a Titanium Moots Mooto X 29" hard tail mountain bike.  The bike was custom built for his 6'7" frame and very unique as a result. 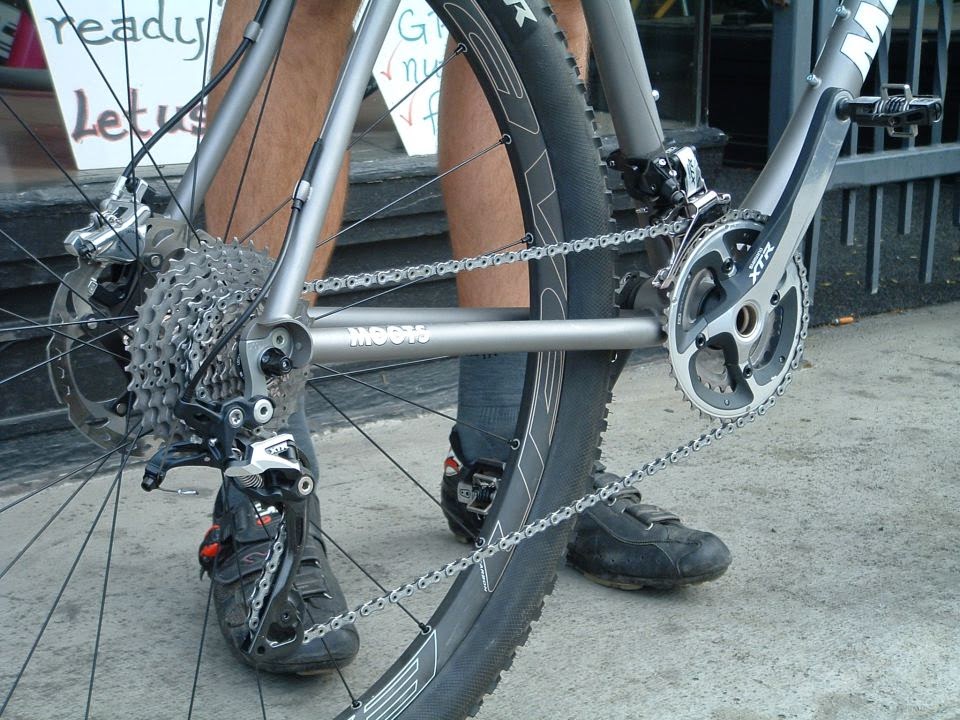 It is built with Shimano XTR 2x10 and a 180mm crank.  Easton Carbon Tubeless Wheels and white Fox fork are the other major components.  Please forward/share this post to as many people as you can and call law enforcement immediately if you see this bike. 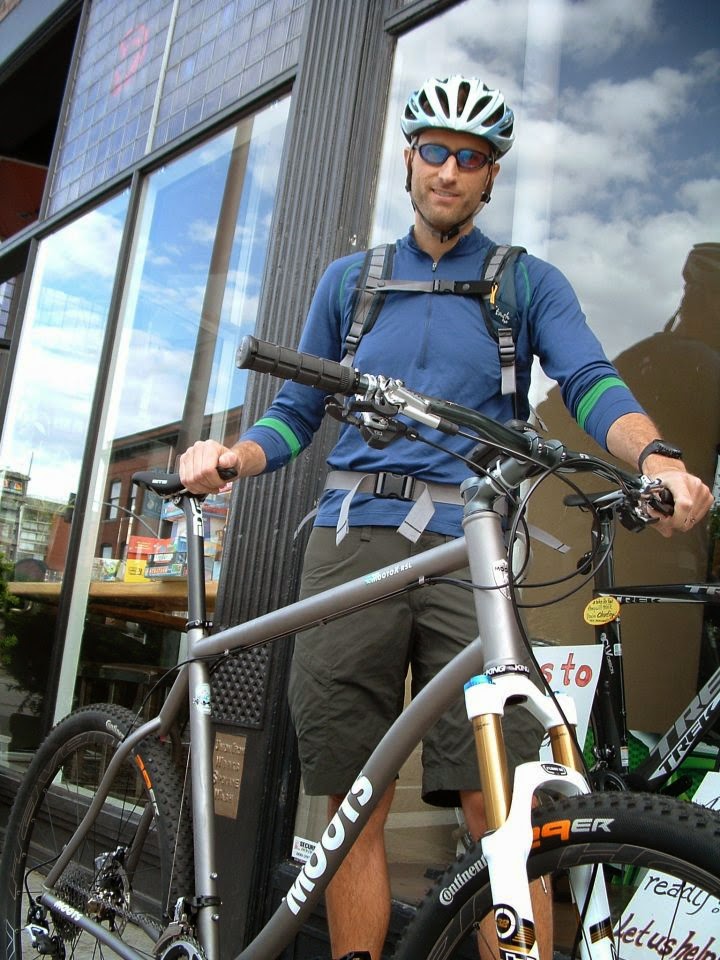 Two Wheel Transit Bicycles is offering a $100 reward for information leading to the recovery of this bike in good condition.  Please call us at 747-2231
Posted by Owner 2 at 6:43 PM No comments:

Travis Nichols was kind enough to share the following regarding his new appreciation for Tubeless Tire Technology: 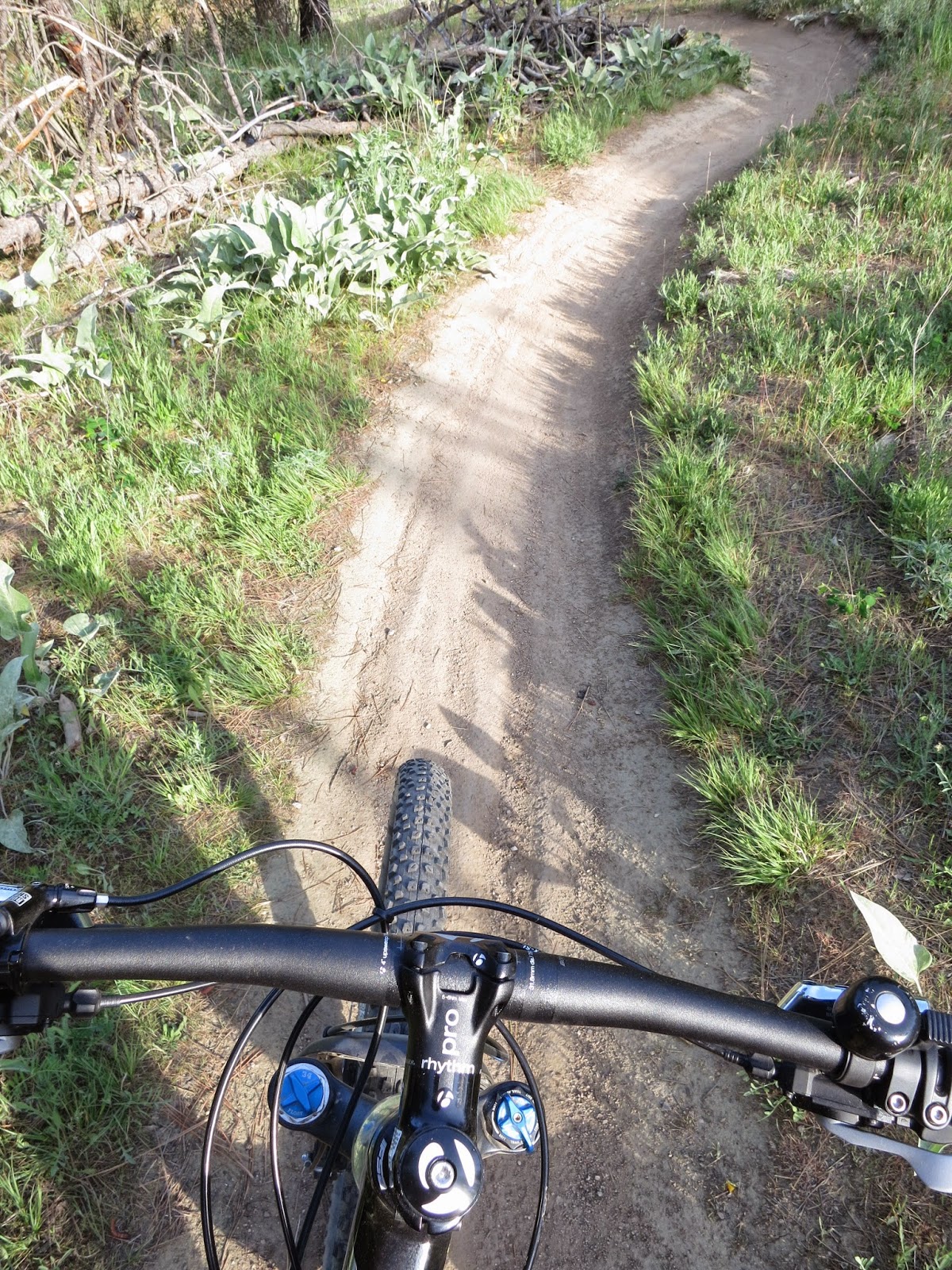 I was soaring down “Will’s Traverse” at Beacon Hill, my big wheels ignoring rubble and my plush suspension eating up small jumps.   The wind was cool but the sun was warming and my smile indicated it was a perfect ride.   In an instant my buzz faded and my stomach sank as I heard the “pppssssssttt” that every cyclist on dirt or tarmac dreads as the life-giving air escapes the carcass of their dying tires.

I halted knowing that my ride was delayed if not over.   As I slowed, the escaping pressure became more evident without the noise of breathing and rolling rubber over dirt.  I was watching carefully for evidence of the destruction as I slowed, as the tire rotated to the crest of the revolution I witnessed the fantastic sight of Stans fluid pulsing into the air like blood from a severed artery.

I stopped after one more revolution and witnessed the modern miracle of tubeless tires:  coagulation.  Or the latex equivalent there-of.   It was a miracle; my ride was saved as if by divine intervention! In an effort to give thanks to the role of technology in my life my legs redoubled their effort and I cranked away from the incident with thankful haste.


As a “Clydesdale category rider” I’ve had a nasty history of mangled rims, broken spokes and an unending legacy of thorny flats and snakebites.   These ride crushing pauses concluded two years ago when I watched a youtube video, splashed some Stans into my Schwalbe Nobby Nics and pumped like mad to seat the bead.   Within an hour I had a revelation about tires and their role in my cycling life.   Years later after witnessing several self healed gashes, stab wounds and slices on various tires,  I am a firm believer in tubeless technology.  If you are a cyclist who pedals on two wheels…

You deserve to go tubeless.  Beyond shedding ~half a pound in weight (rotating weight mind you!) riders will enjoy better ground contact from lower tire pressure, faster track times because of the lower pressure, a self healing system that has yet to fail me and an overall smoother and easier ride.   I don’t think there is any reason to use tubes at this point if you use two wheels under human power!

Please consider that my testing has all been in the lower PSI/bar of the MTB world but I guarantee you my next cross or road wheel set will be a tubeless compatible system and will have a tubeless ready tire like the Hutchinson Sector 700x28c or the Schwalbe One 700x25c mounted with a bit of Stans in it.  I’ve also yet to test the technology on a unicycle but I would happily risk a few spills and blunted shins to prove the point.

I encourage any reader interested in reliability and or performance to drop into the shop and see what options are available for your two wheel wonder.
Posted by Owner 2 at 6:00 AM No comments:

Bruce was kind enough to lend me his Trek Farley for a bit since he has been focusing on road miles for an upcoming event.  I am however focusing on fun, exploration and adventure this year. 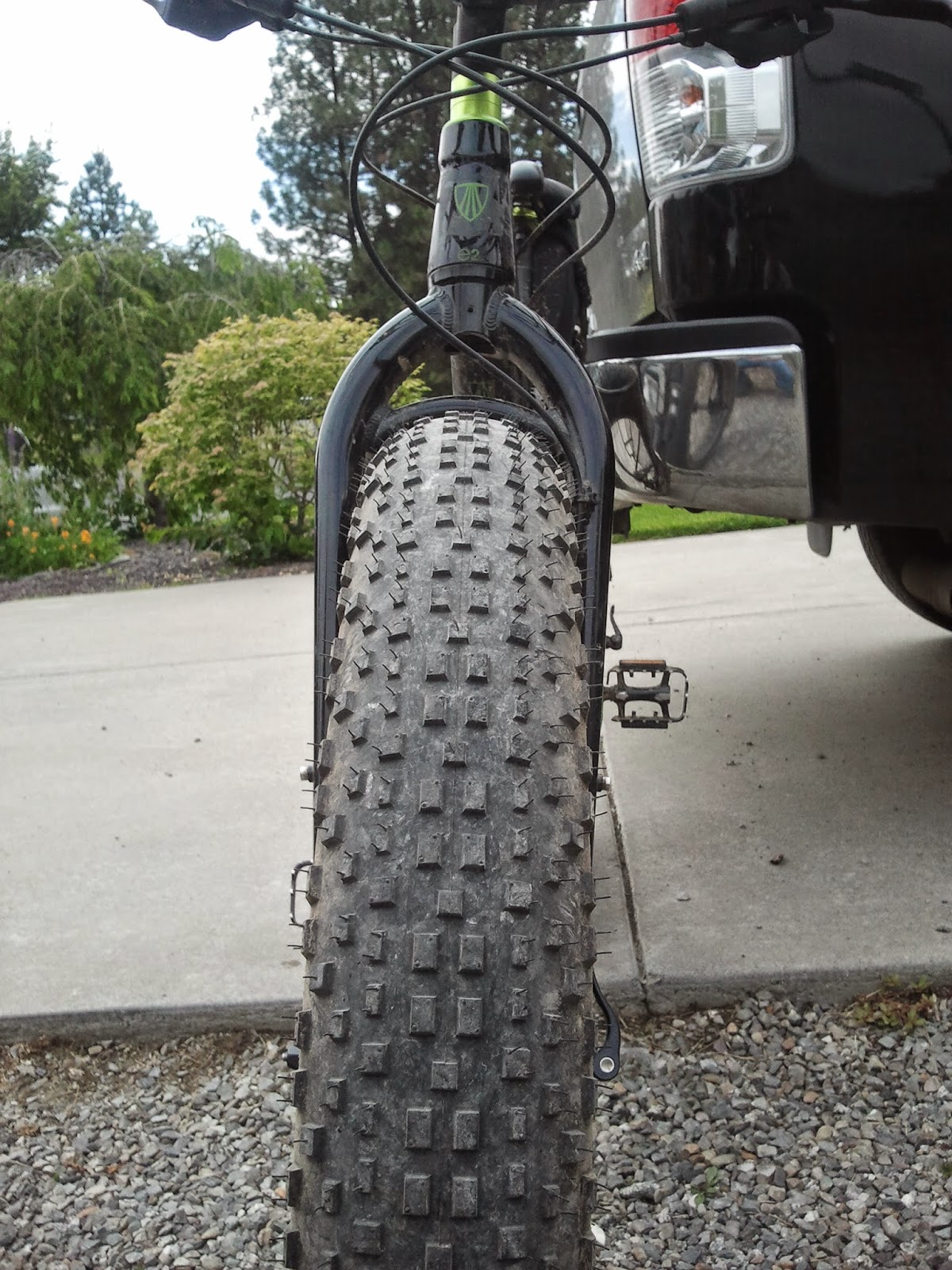 He should have known that I would get it dirty - I say it is supposed to look like that. 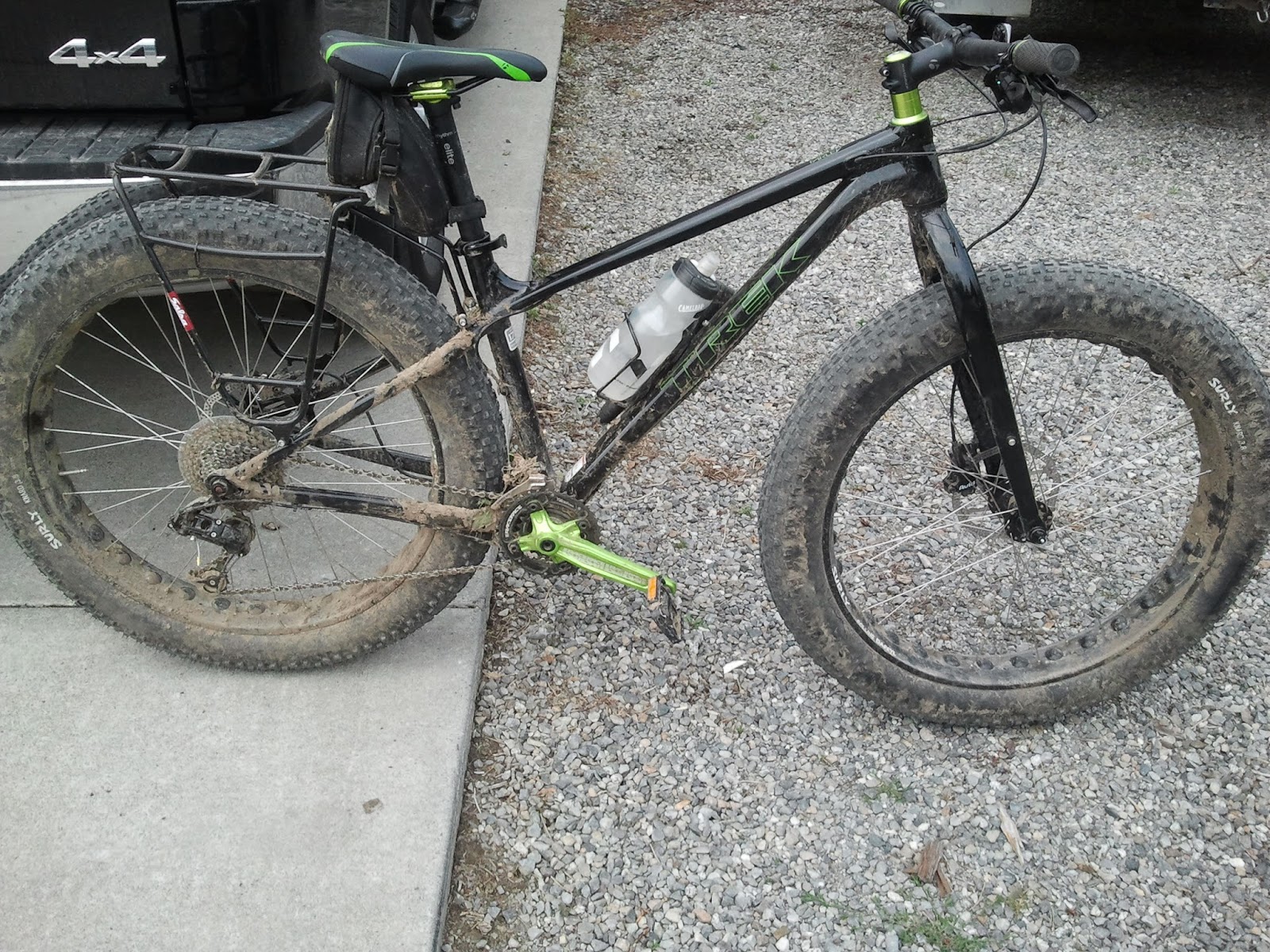 I was fortunate to receive an invitation to play hooky on Friday afternoon to explore the Mt. Spokane Trail system from Fat Bike Dan.  Overall, the trails were rough but surprising little mud. I know from both that I was running too much pressure in the tires as ride quality and traction both suffered.  The other thing I noted was that I did not get that nice pull to the inside of turns when I set the tires on edge. 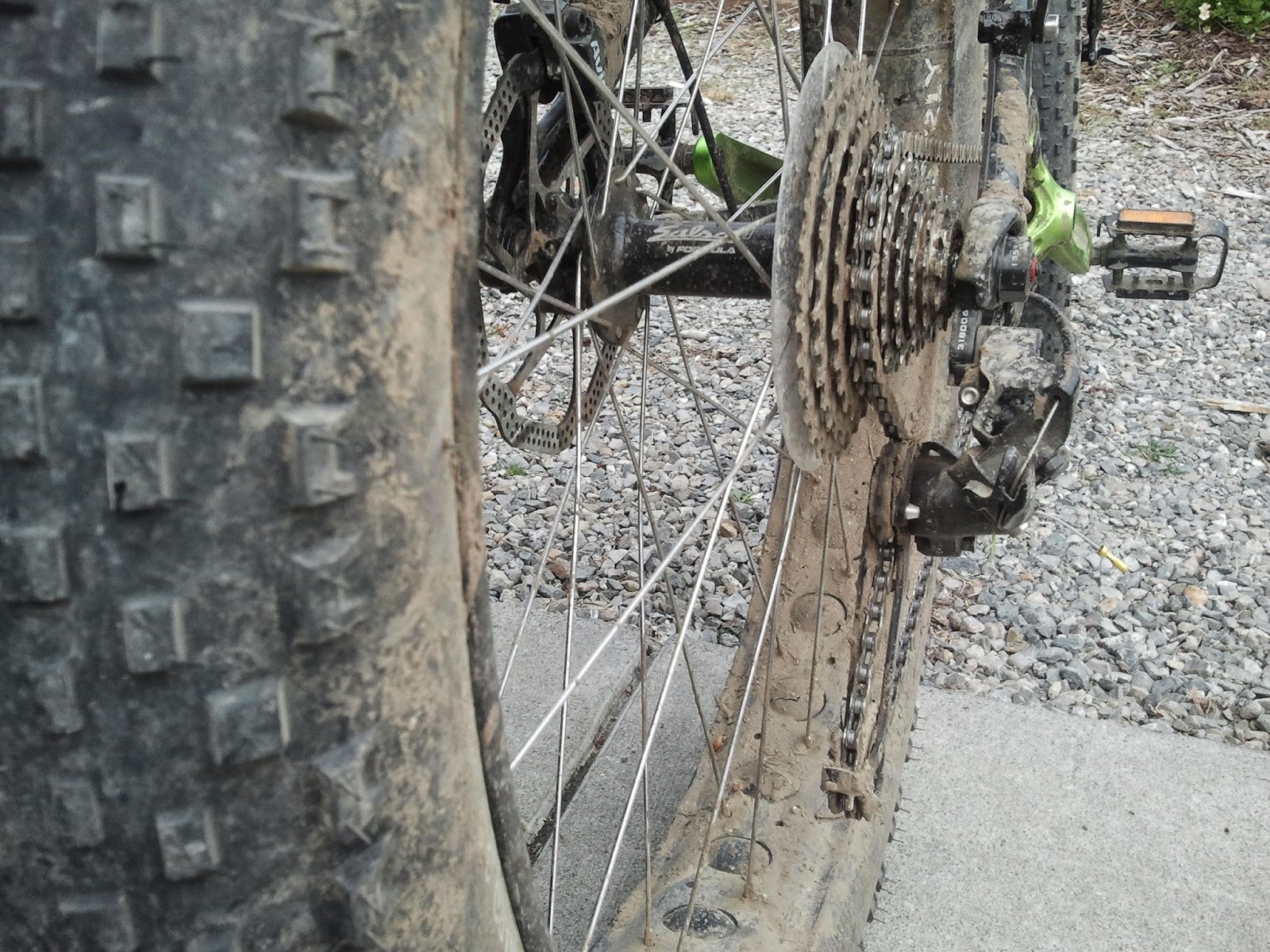 I also was not running clipless pedals so all power was produced on the down stroke which caused the rear to spin in the mud necessitating a points-robbing stab of the right foot during the ensuing stall.  I must also point-out that Fat Bike Dan cleaned all of the sections and somehow he and his bike repelled the mud. 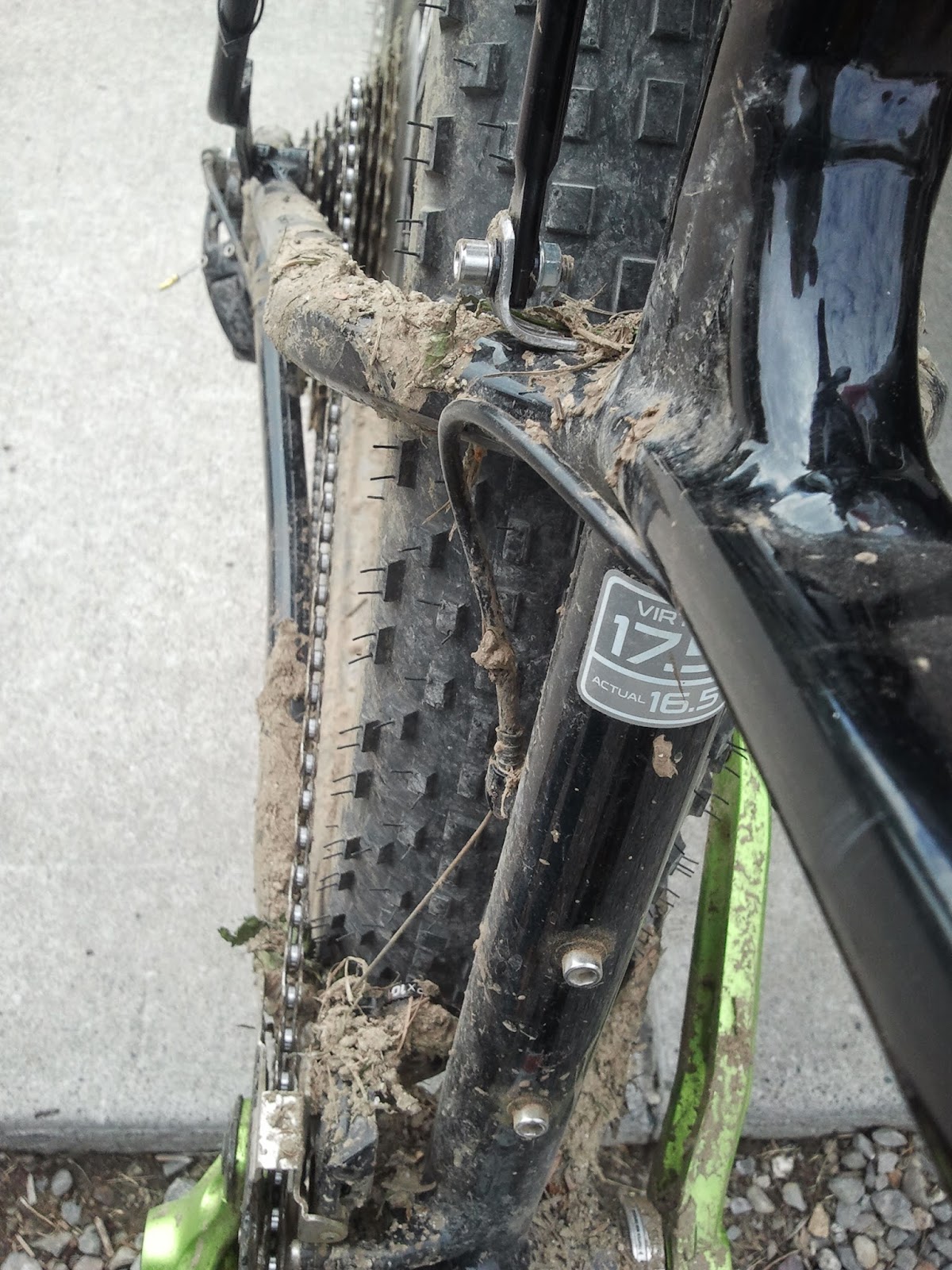 Sporting an aluminum frame, the Farley is one of the lighter fat bikes on the market and has it pretty dialed in terms of components, geometry and ride quality.  I declare fat bikes are here to stay and will enjoy watching the upcoming battles of weight reduction (as if it matters in this class) and price increases as carbon frames, forks and wheels become more available in the market.

In the meantime, I will be working to convince the Chairwoman of the Domestic Finance Committee of the value of investing in this particular bike this year given its year-round capabilities. 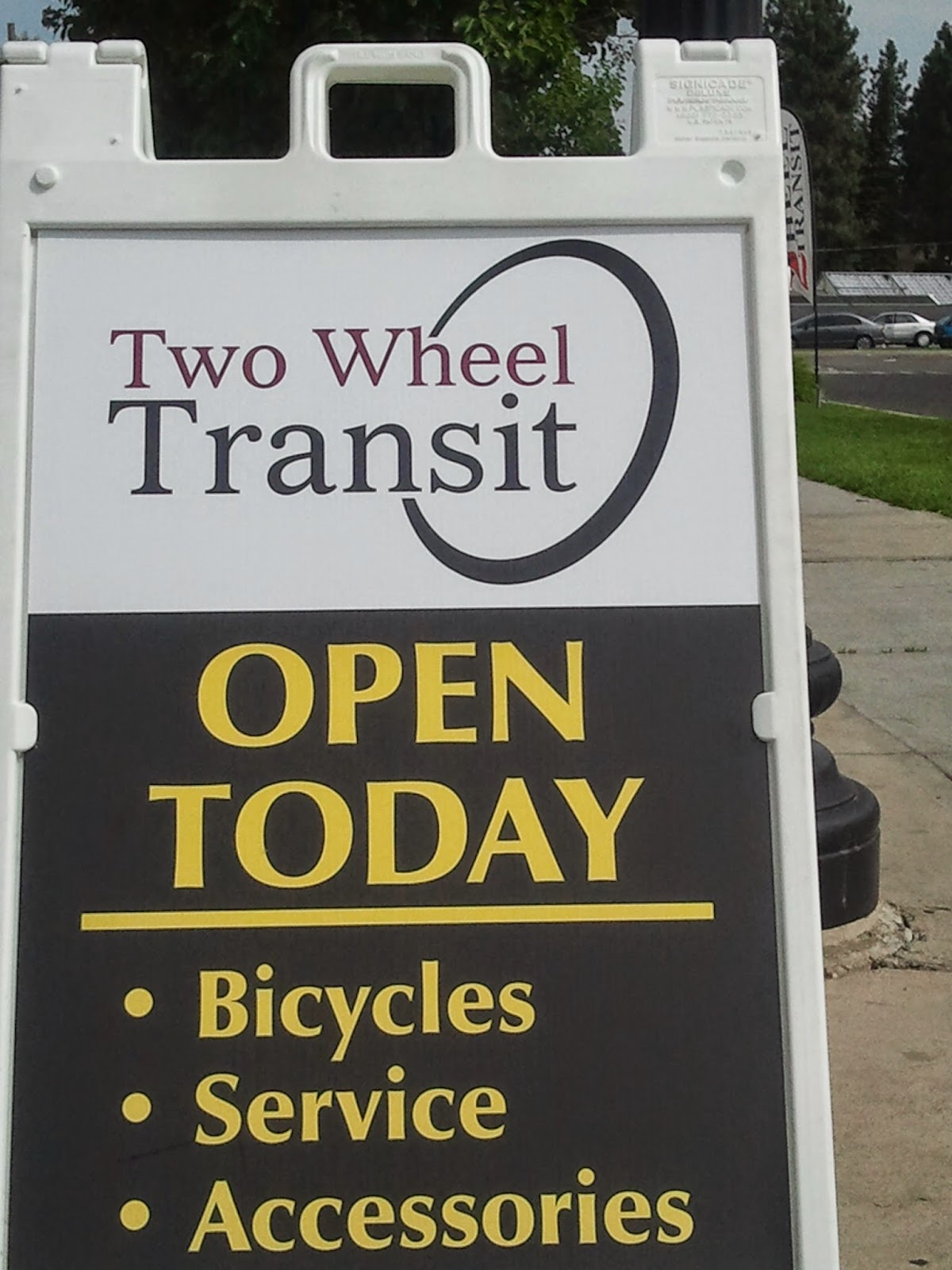 Two Wheel Transit Bicycles is now open on Sunday from 11am - 4pm for the summer.  Feel free to stop by on your rides for to fill a water bottle, borrow a pump or just say hello!
Posted by Owner 2 at 7:41 AM No comments: