Looking Back on this Seems Appropriate Today

It is the end of November and our hours of daylight are rapidly dwindling.  I feel my energy following the same trajectory and remembered this seemingly prescient posting from just a few months back.  I knew what was coming from experience.  Hopefully, reading it will take you back to that glorious day if only for a brief time.   Enjoy.

I had the good fortune of being able to make the 2nd Annual Black Friday ride this morning.  Last year there was some new snow on the ground which combined with the colder temperatures caused me to stay in bed and miss the inaugural ride organized by John Speare.  I can't say for certain, but I think the ride was designed as a subtle protest against standing in line for hours and fighting the crowds at the after Thanksgiving Day sales events at national retail stores and malls.

About 11 people showed-up riding mountain bikes, cyclocross bikes and even a couple of 29" single-speed bikes. The single speed guys were very tough riding the variety of terrain with only one gear to work with.

The route is known by locals as the Northwest Passage and meanders from White Road on S 195 all the way to the trails along the Spokane River past Doomsday Hill. There is no way I would have ever been able to negotiate the ride even with a detailed map nor am I certain I could repeat the ride solo again since I was looking down trying not to die most of the time. 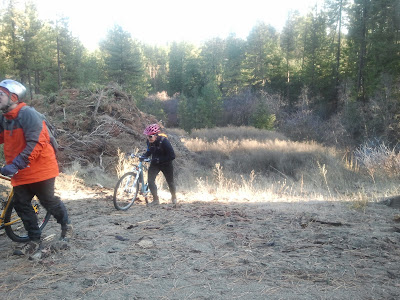 It all started with a ride from Hangman Golf Course up to the meeting place on 43rd Ave.  The cyclocross tire outfitted Superfly was the steed of choice for this adventure.  There was some ice on the road, but the bike handled it without incident.  I knew I was in trouble when I saw the serious looking crew assembled at the Rocket Market. 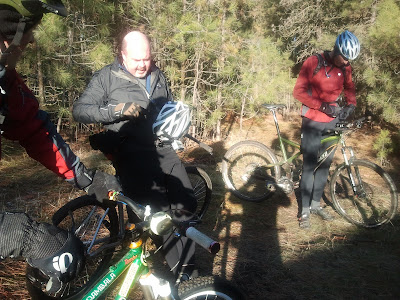 After introductions, we ambled down to the south where the fun began with climbing the grade to the top of White Road.  After that it was some technical single track along a cliff, fast descents and a death-defying leap across train tracks in front of an oncoming train blowing its horn for all it was worth. 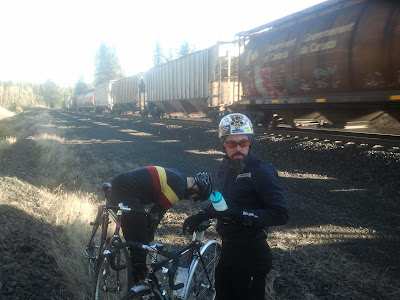 More trails, fast descents and a spin through High Bridge Park and Peoples' Park put us down by the Spokane River.  More trails,  a flat tire and some regrouping brought us to the foot of Doomsday Hill.  Most went up the hill while those from the south took the highway back to Hatch Road.

It was a great ride with a great group all out for the same reason - the love of riding bikes.  It all added-up to about 40 miles for me and a really big grin for most of the morning.

One of the weird goals I have each year is to ride outside at least one day each month.  The other meaningless objective is to ride on Thanksgiving, Christmas and New Years Day (a Trifecta as Bill Bender calls it).  After last week's winter blast, I thought my outdoor days were done for the year but you always hope for a break with clear roads.  Today cooperated nicely and I sneaked in a 21 miler on the Superfly. 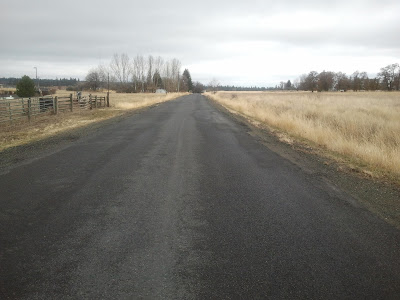 The road was even dry in a lot of places. 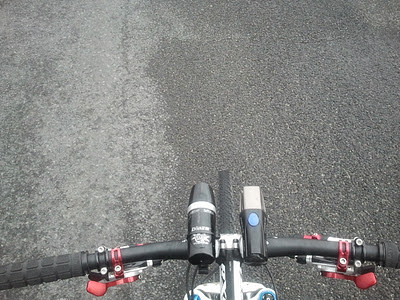 Apparently a lot of other folks had the same idea as I saw runners and cyclists as far out as Baltimore Road.  It really felt good to be out after a week on the trainer.  I am hoping to do the same tomorrow morning.

Have a great Thanksgiving!
Posted by Owner 2 at 11:36 AM No comments:

Email ThisBlogThis!Share to TwitterShare to FacebookShare to Pinterest
Labels: d

Time for the studded tires. 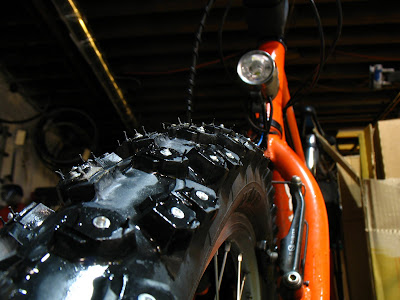 Out-accelerating the motorists from every stoplight Priceless!

Posted by mechBgon at 2:23 PM No comments:

Gals Get Going has recently formed to bring Inland Northwest women together for a multitude of activities and coaching opportunities.  More than just a triathlon or cycling team - there will season specific opportunities for workouts which will include cross-country skiing.

There is even talk of cycling tours and numerous rides during the season.  We know some of the coaches that have been identified so far and know them as accomplished athletes that balance work, family and outdoor lives.

We are still working-out the details of our affiliation, and very excited about the possibilities of working together in the coming year.

Check them out at: http://www.galsgetgoing.com
Posted by Owner 2 at 7:19 AM No comments: 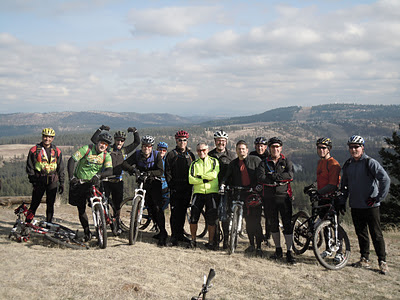 Yesterday I had the good fortune of riding with about 15 riders through Riverside State Park trails between 9 Mile Dam and 7 Mile Bridge.  This was THE off-road test of which I was dreaming when I installed the Bontrager CX0 Cyclocross Tires on the Gary Fisher Superfly back in October.  The setup for the day was tubeless with about 40 psi front and rear on in the 700x38 tires.

This ride was a good test for several reasons:


Observations:
I WAS able to climb anything the fat-tire bikes could climb though technique became more important.  The narrower tires meant that I had to keep my fanny planted in the saddle to maintain traction on the steeper sections.  I missed being able to maintain traction while standing to generate more power to get to the top of a climb as I can with full-on 29" fat tires.  This also meant that I had to be more deliberate in line and gear selection well prior to the base of the climb.
I WAS able to descend with reasonable control on the steep loose stuff dropping in to the Deep Creek area.  Again, this involved being a bit more cerebral at the top of descent and maintaining control since I could not depend on a big footprint rolling beneath me to save my bacon if I had to come to a complete stop quickly.
No surprises with either of these scenarios based on my test runs across the HD Bluff Trails the last few weeks.
The tires absolutely rocked on the hard pack sections and paved road compared to the fat tires.  I observed that I was rolling faster at a lower energy expenditure than my cohorts.   One place I found myself wanting for big-volume fatties was anytime we encountered exposed baby head rocks.  The low-volume tires did not yield and wrap themselves over the rocks like I took for granted with a 29x2.2 at 30 psi.  This meant again that I was forced into picking better lines, and using more body English any time I encountered these smooth beasts.  I also felt more of the bumps through the hard tail with this setup.
Where they did not rock is when we hit some very deep and loose sand at the end of the ride.  I became the only casualty of the day in the battle to remain vertical when I sunk in the deep sand and fell over with an unceremonious thud.  The following riders showed incredible compassion riding around me while hurling various insults.
In addition to sand, I expect the tires would be miserable and ineffective in deep, slick mud as you often get down in the sections close to the river.
Bottom Line:
The set-up performed well for 99% of the conditions encountered and are a great set-up if you like commuting or road riding on your 29er with some off-road or gravel road jaunts.  the climbing ability was acceptable and the bike was lighter and faster as a result of the cross tire installation.
Because they are not hardened against glass, running tubeless with sealant is a must for the streets of Spokane.  Remember, these are not high mileage tires so you can expect to replace the rear somewhere around 500 - 600 miles of road riding (your mileage may vary).
Posted by Owner 2 at 10:31 AM 2 comments:

And We Are Live!

The Two Wheel Transit Online Store is officially open for business.  Browse and purchase the same great products we stock in the store all while wearing your pink bunny slippers.  You may have them shipped to your house or pick them up at Two Wheel Transit with Free Shipping.

www.twowheeltransit.com
Posted by Owner 2 at 8:34 AM No comments: